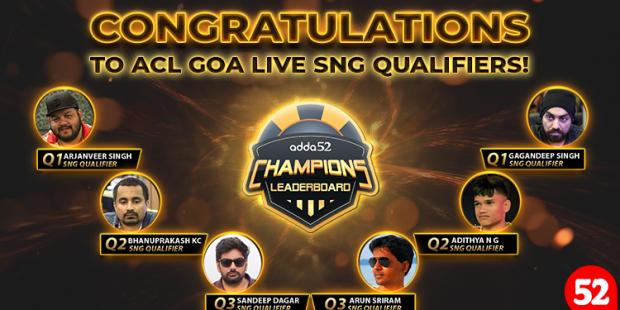 India’s largest poker site, Adda52, kicked off 2021 on a firecracker note by launching its most-massive leaderboard race ever, the Adda52 Champions Leaderboard (ACL), in January. The mot-talked-about leaderboard of the year promising a staggering 2 Croes is now in its final stage and will conclude in 2022 with Adda52 POY – Goa Live SNG to be held in the first week of February. The eventual winner of this SNG in Goa will be declared the ‘ACL Player of the Year’ (POY). In addition to the bragging rights of winning the ACL POY title, the champion will bag a whopping INR 20 Lac sponsorship deal from Adda52 along with a chance to represent the site as a Team Pro!

The ACL race is designed with 4 unique monthly leaderboards with the top-ranked players from these leaderboards winning from a share of 13.5 Lac each month. That is not all, the  top-5 ranked players from each monthly leaderboard qualify for a 5 Lac Quarterly ACL SnG, meaning that each month 20 players qualify for the quarterly SnG. The top 2 finishers from each Quarterly SnG then qualify for the live-streamed ACL Goa LIVE SnG to be played at India’s luxurious casino Deltin Royale in beautiful Goa.

The ACL race is almost on the home stretch now, with only one quarterly ACL SNG remaining for players to qualify for Goa Live SnG (ACL Finale) to be held in early February in Goa. The final 5 Lac Quarterly SnG will run on  8th January 2022 to determine the last two qualifiers for the live SNG. This is will be followed by a 5 Lac One-Time SNG on 13th January for the remaining players from Quarterly ACL SNG tourneys. This will serve as the last chance qualifier and the winner of this SNG will book the 9th seat for the Goa Live SNG to be live-streamed from Deltin Royale in Gao.

The Adda52 POY – Goa Live SNG will see a total of nine players battling it out for the coveted ‘Adda52 Player of the year title’ and trophy along with a 20 Lac sponsorship deal from Adda52.  Six players have already booked their seats for the highly sought-after Goa Live SngG and they include the likes of Arjanveer Singh Chadha, Gagandeep Malik, Bhanuprakash KC, Adithya N G, Sandeep Dagar, and Arun Sriram.

Chadha and Malik qualified via the first quarterly ACL tourney held in April this year and won 1.5 Lac and 90k respectively along with entry to the Goa Live SNG finale.

After booking his seat for the Goa Live SNG, Arjanveer said, “The ACL is a one-of-a-kind opportunity for tournament players to be rewarded for their consistent performances. There is nothing like this out there. Personally, I love chasing MTT leaderboards, so when the ACL was announced I knew I had to be in the running. I’m so glad that I have booked my spot for the finale with a chance to be named as “Adda52 Player of the Year”. That thought gives me goosebumps every time.”

Sharing his views and feelings, Malik said, “I think, the ACL is a first of a kind promotion being done by any site where champions of every month battle in quarterly SNG to fight it out for the top spots. I think it’s a fantastic opportunity for upcoming players like me to hone their skills with stalwarts of the poker industry. I am really happy to have qualified for Goa SNG and get a shot at the ‘Adda52 Player of the Year title’. Looking forward to Goa and hoping we run good. Cheers!”

Bhanuprakash and Adithya qualified via the second quarterly SNG in July this year. Both of them earned 1.5 Lac and 90k respectivley for thier podium finishes.

Among the most lastest players to qualify were Adda52 regs in Sandeep Dagar and Arun Sriram. Both made their way to the ACL via the quarterly ACL SNG held in

ACL is a fantastic opportunity especially for the upcoming players in India to hone their skills with the stalwarts of the poker industry, win exciting prizes, and qualify for the Goa Live SNG to get a shot at winning the coveted ‘Adda52 Player of the year title’ along with 20 Lac sponsorship deal from Adda52. The more tourneys you play, the more points you earn on the leaderboard. So, make most of the last few days left for the ACL leaderboard race, qualify for the Goa Live SNG, and say goodbye to 2021 with a bang!