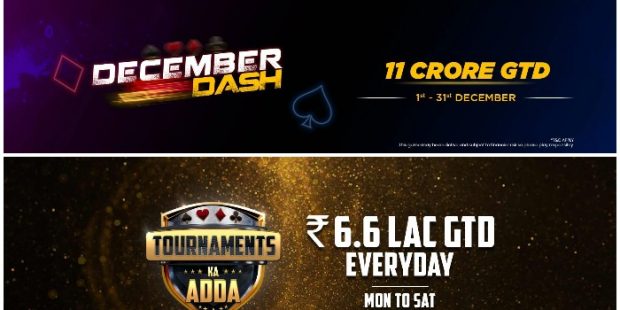 The New Year may be a month away, but celebrations on India’s largest poker site Adda52.com have already begun. Known for high-octane cash games and well-curated tournaments, the online poker giant has come up with exciting new tourneys, challenges, leaderboards, and awesome cash prizes, upping the ante and making December a month to remember for all MTT enthusiasts out there.

Adda52 is already running several lucrative promotions for players. Boasting the most extensive user base in India of more than 20 Lac, the poker site has set a tall benchmark for the Industry through massive GTD MTT offerings like AOPS and DOPT. To spice up things further and end 2021  on a high, the site has rolled out a bumper MTT lineup for December, with December Dash and Tournaments Ka Adda.

December Dash is a month-long extravaganza promising a massive INR 11 Crores in guarantees across 70 + tournaments, including 9 marquee events every week. The tourney buy-ins range from INR 1,100 to INR 11,000, with the prize pool guarantees starting from INR 8 Lac and going all the way to INR 25 Lac. Alongside many of the crowd favorite events like Iron Man, The Mint, Maverick, Godfather, and The Ballers is the 1 Crore GTD Nano Poker Series (NPS), which will run from 6th to 12th December.

Sundays on Adda52.com are obviously going to be really special as they come packed with exciting marquees like the 25 Lac GTD Adda52 Millions, 25 Lac GTD Mega Suits, and 10 Lac GTD Sunday Showdown.

Spicing up things even further is the ‘Tournaments Ka Adda’, a mid-stakes MTT offering with INR 6.6 Lac guarantee every day. Each day of the week from Monday to Saturday is going to be special this December with as many as 8 exciting tournaments on the Tournaments Ka Adda schedule, starting from morning till night.

The tourney buy-ins range from INR 250 to INR 880, and the prize pool GTDs start from INR 50K GTD, going all the way to INR 1.5 Lac. Alongside many of the already running events like Morning Adda, Afternoon Adda, Sundown Adda, Evening Adda, and Nighttide DST Adda are the three exciting new tournaments, which include Freezeout Adda, Dinner PLO Adda, and Bounty Adda. That means Tournaments Ka Adda has all kinds of tournaments, regardless of whether you like to play PLO, Freezeout, or bounty events. Adding to the delight, the buy-in of the 1.5 Lac GTD Afternoon Adda has been decreased to INR 550 from INR 990. The idea is to make this tourney accessible to all the players.

And hold on, there is more to it! Adda52 is running satellites for all the events of the ‘Tournaments Ka Adda’ promotion. The satellites are already live. What are you waiting for? Join the tables and celebrate the winter with massive prizes up for grabs!