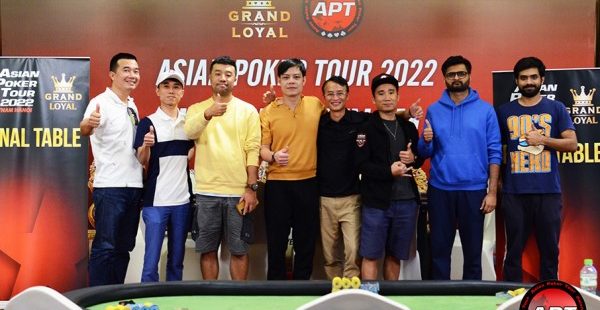 Following five days of APT Vietnam 2022 Main Event action that kicked off on June 19  at the Grand Loyal Poker Club, it is finally down to the 8 players led by Vietnam’s Pham Tien Dung (3,065,000 – 76 BB stack). He was the only player to cross the 3M mark and he hit the mark after cleaning out Dang Dinh Tung aka Tung Red in 10th place. He is running red hot and has already won his first ever APT title with his Super High Rollers win. He will put his best foot forward to continue his momentum.

The big news for the Indian poker community is that there are two Indians in contention among the final eight players, namely Shardul Parthasarathi and Ashish Munot. Both players have 1,400,000 chips to fight for the top spot. Of the two, Munot is the former WPT India Main Event champion and has APT cashes to his name. Parthasarathi is relatively a newcomer to APT but will be putting his heart and soul to make his mark when he returns for the fourth and final day of the main event today.

The ongoing Main Event attracted 471 entries and  created a prize pool of VN₫ 9,137,400,000 (~US$ 394,159). 40 players have already made money with the biggest portions to be awarded today.  the inaugural APT Vietnam Hanoi Main Event champion will pocket the massive VN₫ 1,929,250,000 (~US$ 83,220) first prize. He/she will also receive the APT Main Event Trophy and APT Championship Ring. Cards will go in the at 130pm and you can watch it live via APT YouTube and APT Twitch.

A Look At Final 8 Chip Counts

Two Indians to fall out on Day 3 of the event were Ankit Jajodia and Vaibhav Sharma. The former had the ninth highest stack of 318,500 and finished 42nd for VND 46,740,000. Unfortunately for Sharma who had the eighth highest stack of 341,500 chips, he became the bubbled the event busting in 49th place. So only Indians Munot & Parthasarathi in contention now and we wish them all the best!!