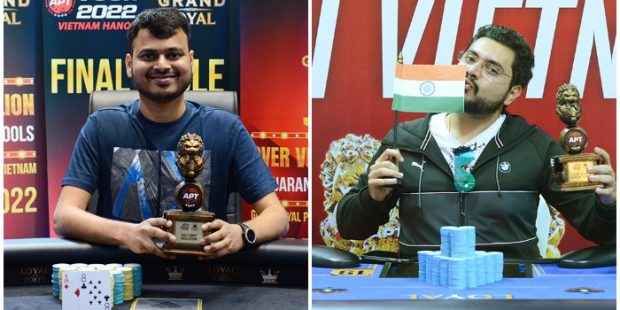 Vietnam is turning out to be the biggest hunting ground for Indian poker players with several of them already claiming their coveted poker titles here. Team India’s live poker title journey in Vietnam started in 2018 with the musician-turned poker pro Dhaval Mudgal winning the first-ever WPT Vietnam Main Event title and inspiring several young guns to come to this exotic location to play and build their bankrolls. The momentum continued for Team India with two Indians winning the APT Vietnam Main Event titles in 2019. The first APT Vietnam ME victory for India in 2019 was scored by Abhinav Iyer. Following in his footsteps was Akshay Nasa who won it in November 2019.

More recently, India’s ace poker player Zarvan Tumboli took down the WPT Prime Vietnam Main Event for his career-best live cash. A few days after Tumboli’s victory, it was Shardul Parthasarathi who etched his name in the history books by winning the inaugural APT Loyal Hanoi Vietnam Main Event! Hot on the heels of Parthasarathi’s victory, Alok Birewar championed the No Limit Hold’em 2 event, while the in-form player Zarvan Tumboli won the Deep Stack Hyper Turbo of the series.

The final day of the event began with India’s Birewar leading the final 8 players and after five hours of play, he shipped the tournament to earn his first-ever APT title for VND 191,840,000. On his way to the victory, he eliminated four players form the final table, including fellow countryman Ankit Jajodia  who exited in 6th place for  VND 37.07M (INR 1.25 Lac). Jajodia also final tabled the VND 11M buy-in PLO Event where he had walked away with VND 17,160,000 (INR 57,844) for his fifth-place finish.

The heads-up play lasted for just 15 minutes. On the final hand, Anh shoved with 10h 8h and Birewar called with Ad 8s. The board ran out 5d 7d 3d 5s Js, giving Birewar the pot and his first-ever APT title.

Zarvan Tumboli has down it again! Having won the World Poker Tour (WPT) Prime Vietnam 2022 Main Event title for a massive $131,394 recently, the in-form pro is back in the headlines, this time for winning the VND 6,600,000 buy-in Hyper Deep Stack Turbo of the APT Vietnam series for 73,060,000. This was Tumboli’s second APT title as his first APT win came at the 2017 APT Macau Opening Event.

During four-handed play, was anyone’s game  with average stack being a just 10 BB. Things changed pretty much after the chip leader Maaku Tanaka busted his fellow countryman Makoto Fujia but could not keep his momentum going as he lost three shoves and exited in third place, leaving Tumboli and Nguyen Viet Anh in the heads-up that ended with an ICM deal that guaranteed Tumboli the higher payout and second APT win that fetched him the  VND 73,060,000 in top prize money.