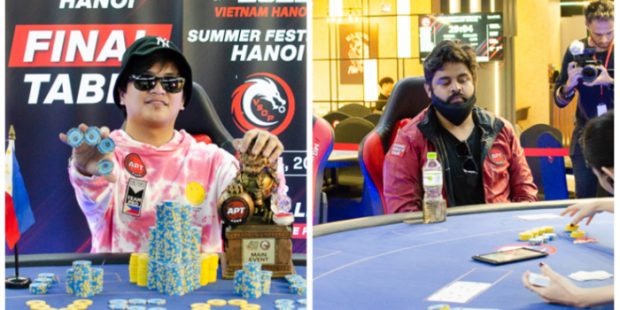 The Asian Poker Tour (APT) Hanoi 2022 – Vietnam Series of Poker (VSOP) Main Event is finally in the books with Filipino player Vamerdino Magsakay winning it for a career-best VND 1,986,320,000 along with a shiny new trophy and a ring. Magsakay entered the FT second from the bottom and held on to reach heads up against Nguyen Quang Huy who earned VND 1,324,230,000 for his runner-up finish.

The 2018 DPT Xpress Main Event Ankit Jajodia from India was also in hunt for the Main Event title. He entered the eight-handed final table with the third-largest stack (1,290,000 chips), behind Nguyen Vu Cuong (1,725,000) and Dao Minh (4,585,000) who held the chip lead. Jajodia was doing pretty well but became a short stack during the four-handed play. Eventually, he was eliminated by Magsakay in third place for a career-best VND 920.59 Million ( INR 31.42 Lac), ending Team India’s hope for a third straight Main Event title in Vietnam this year. Following his exit, it came down to the heads-up play.

The heads-up began with Huy being ahead 91 BB to Magsakay’s 59 BB. The latter managed to snatch the lead and had a 2.5:1 advantage at one point. While Huy was able to regain the lead, he still could not close it out as Magsakay surged ahead once again and the shipped the title. On the final hand, it was a pre-flop all-in with Huy holding pocket eights against Magsakay’s Ah 7h. The board ran out Jd 3d As 7c 6s, giving the title to Magsakay. Huy had to settle for VND 1,324,230,000 as the runner-up.