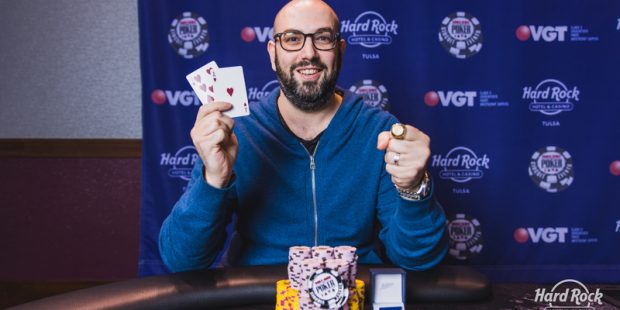 Morris had more than $800k in tournament earnings prior to entering this Main Event. Across his 63 prior in-the-money finishes, Morris had made deep runs in WPT championships and in WSOP events but never won a tourney. Finally, he got the monkey off his back, ending his winless streak this week.

“It’s been a long time coming. I’ve been playing for 17 years so it feels really good.”, Morris said.

The final day began with 4 players remaining, with 4-time ring winner Mike Cordell in the lead and Morris second in chips. Bracelet winner Blair Hinkle entered the day as a short stack and was the first to fall. Hinkle got it in with A-Q against the A-4 of Morris, but a 4 on the flop turned the tables. Hinkle found no help on the turn or river and exited in 4th place, earning $61,498 for his efforts.

Poker vlogger Cedrric Trevino was the next to leave the final table. He got all-in on a Qs 8s 2s 4h board with pocket tens facing the Qd 8h of Mike Cordell. The Jc on the river resulted in Trevino’s elimination, sending him packing with $82,737 and setting the heads-up between Morris and Cordel.