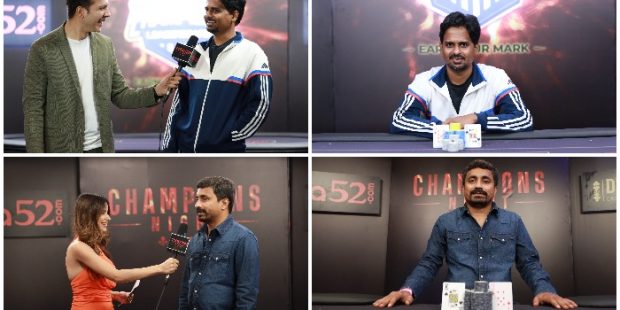 Sundays are always special for Adda52 players but this Sunday was super special with the online poker giant running the Adda52 Champions Leaderboard (ACL) Finale in Goa and hosting some exciting online events headlined by 25 Lac GTD flagships – Adda52 Millions and Mega Suits. All eyes were on the ACL SNG Finale, a live-streamed tourney running at the Deltin Royale casino in Goa. The grand finale saw nine of the most consistent players, who did exceedingly well for the whole of last year on Adda52, battling out for the coveted title, a massive 20  Lac, and Adda52 Team pro contract.

The nine finalists of the grand finale included the likes of Manish Lakhotia, Arjanveer Singh Chadha, Devrat Singh, Gagandeep Singh Malik, Deepak Singh, Arun Sriram, Bhanu Prakash KC, Adithya N G, and Sandeep Dagar. While everyone looked so excited and keen on taking it down, it was the former Adda52 Big Game champion Arun Sriram who etched his name in the history books by winning the first-ever ACL POY title. In addition to the bragging rights of winning the POY title, the 38-year-old poker pro from Bangalore earned a massive INR 20 Lac and Adda52 Pro Contract! It was his second live tourney in Goa and he did exceptionally well, playing some splendid poker and finally shipping it. Sriram is no stranger to winning big and has already won more than 67 tourney titles, including several marquee events on Adda52. His biggest score on Adda52 came just last year in July when he championed the Adda52 Big Game for INR 14 Lac. Talking about his historic win last night, he said, “It feels amazing as it is my first time that I have won a live poker tourney. This is my second trip for a live game. I am purely an online pro, so in many ways, it is a new feeling for me and it feels great.”

On his way to the historic victory, Sriram eliminated two very experienced players like the former Full House Finale champion Devrat Singh (7th place) and the former AOPS Mini Main Event champion Arjanveer Singh  (runner-up). Being the most experienced and dangerous player among the  finalists, Chadha was a crowd-favourite to win the title and he lived up to the expectations, dominating all the way and eliminating four players in Gagandeep Malik (8th), Manish Lakhotia (5th), Aditya NG (4th) and Sandeep Dagar (3rd) to enter the heads-up battle for the ultimate ACL SNG Finale title.

Even in the heads-up, Chadha had a significant advantage over Sriram and started off well. However, Sriram played some top-notch poker and quickly turned things around for him, changing the gears and securing a couple of big double-ups to overtake the chip lead. With his second double up, he bagged 97% of the chips in play and continued his domination all the way from there.

Finally, it all ended with the short stacked Chadha shoving his remaining stack of 3.9k with 6s 6c and Sriram calling it with Ks 9d. The board ran out Ac 2h 5d Kc 5c, giving the pot as well as the title to Sriram who seemed super happy to win the ACL SNG Finale title and become an Adda52 Team pro. The festivities for the grand ACL SNG finale kicked off with super fun players parties followed by a special Adda52 Champions Night 10 Lac GTD Freeroll, an invite only tourney that took place on Saturday and saw 64 players battle it out for their share of a massive 10 Lac. Top 15 players were paid out and walking away with the title was Bhanu Prakash from Bangalore who banked INR 2 Lac.

The heads-up between Gagandeep Malik and Bhanu Prakash was the quickest one and ended in just one hand. Malik open-shoved for 119k with Qc Jc and Prakash snap-called with Ks 7d. The board ran out 4h 10c 6h 7h 4s, giving the title to Prakash. Adding zing to the Finale was a grand award ceremony to felicitate the top poker players, celebrities and poker enthusiasts from across the country with a night filled with super fun. Kudos to all the players and good luck for the next ACL SNG Finale!