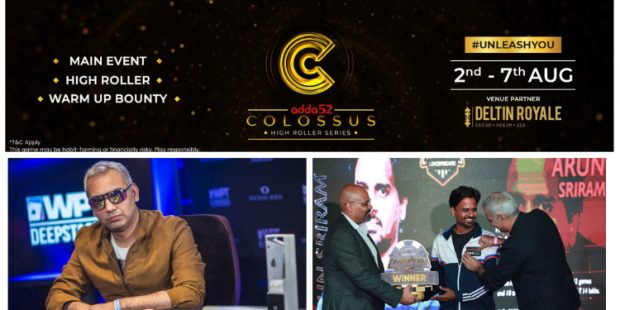 The excitement in the air! The moment you all have been waiting is almost here. The Adda52 Colossus High Roller Series kicks off on 2nd August at the luxurious Deltin Royale in Goa. Getting the ball rolling for the series will be the 3 GTD 10K ME Satty at 6PM and the 2 GTD 20K HR Satty at 8 PM. The live satellites for both the Main Event and High Roller will be running till 5th August, giving players opportunities to win seats to the Main Event & High Roller without shedding much from their bankroll.

The prestigious series returning after a gap of more than 3 years officially kicks off on 3rd August with the 50k Warm Up Bounty where you can win a bounty of INR 15K every time you knock out an opponent. It will be the 200k High Roller (4th to 6th August) and the 100K Main Event (5th to 7th August). Wrapping up proceedings will be the Main Event, which will play down to a winner on 7th August.

The Colossus is undoubtedly the most highly anticipated high roller series in India. And believe us, it is going to be bigger, bolder and better this time with hefty cash prizes, and shiny gold, silver & bronze trophies along with a host of other sweeteners. Scheduled to run from 2nd to 7th August, it is a specially curated series catering mainly to the high-stakes players. Given the high buy-ins and deep structures for the series, there is going to be less variance and more chances to win big. It is a big platform for players who can’t travel internationally to play a quality live series. Also, it is a great opportunity for upcoming players who want to rub elbows with India’s top pros and learn from them.

As we are now just a couple of days away from the commencement of the Adda52 Colossus 2022, we caught up with Adda52 Pros Kunal Patni & Arun Sriram to understand their thoughts on the return of the Colossus after a gap of more than three years. Here is what they had to say about the series!

Currently ranked 12th in India All Time Money List, Patni is one of the most skilled players in India with $520,586 in live tournament cashes. He made big headlines in 2018 for finishing runner-up in the WPT DeepStack Berlin Main Event for $115,819, which remains his best score till date. A former DPT champion, Patni had a spectacular run in the second edition of the Colossus (2nd to 5th May 2019). The Mumbai-based pro was among the top 4 earners at the series. He finished 7th for INR 1,40,000 in the 50K Warm-Up and then followed up that with a 4th place for INR 10,00,000 Lac in the main event.

Patni, who had finished runner-up in the 25K NLH Bounty at the inaugural Colossus series, seems to be pretty excited for the series. He said, “I am very excited about Colossus. People have been wanting to play live events since the pandemic and it’s great that we have another one happening in Goa. It’s a great platform for a lot of players who can’t travel internationally to play a quality live series in India”.

Patni has come to winning a title at the series several times and seems to be pretty determined to reach the finish line this time. “I have had a very decent run in the earlier editions of colossus with a couple of final table finishes. It’s time to close it out this time and get the job done.”- Patni added.

When asked about why one should play Colossus, Patni said, “The fields are usually smaller for the colossus given the higher buy-in for the series. This also means there is less variance and more chances to win an event. So this is a great chance for most players to beat a relatively smaller field and get a big prize uptop”

Finally sharing his tips for the player who will be attending it for the first time, the banker-turned poker pro said, “Be careful about your bankroll. This is a high value series with bigger buy-ins. So if you are not careful with your bankroll it could mean trouble for your bankroll. Having said that, Adda52 is organizing a lot of satellites to this series, both online as well as live during the series. So everyone should play these satellites and try and win a seat to the events via a smaller buy-in”

Coming to Sriram, he is an online MTT beast with a penchant to make it big on the live felts and he proved his mettle early this year by winning the Adda52 Champions Leaderboard (ACL) Finale in Goa for a massive 20 Lac and Adda52 Team pro contract. Hot on the heels of winning the ACL finale in February, the former DOPT June Special champion took down the 50 Lac GTD Adda52 Big Game for a record second time, making him the only player in the country to have won the tourney two times.

Holding a remarkable poker resume with over 100 online MTT titles under his belt, Sriram has been in terrific form since the very beginning of the year and is all set for the kill at the Colossus series.

Sriram, who will be attending the Colossus for the firs time, looks forward to rubbing elbows with India’s top poker pros at the series. Expressing his excitement for the upcoming series, he said, “It is a wonderfully designed event with a bunch of events for High rollers and I am pretty excited to play Live. Really looking forward to meeting some of the top pros and playing some high quality poker.”

Talking about his plans and preparations for the prestigious live festival, the ACL Finale champion said, “Live poker gets very intense and involves long hours of grind. So we need to be physically prepared for it. But the key is in having the right mindset before the series and I am geared up for it.”

When asked about why one should play the upcoming Colossus series, the two-time Adda52 Big Game champion said, “It is easily the highest buy-in events in the country and organised by easily the best site in the country. The facilities, the tables, the environment to play are all top notch and often end up being the best. It also offers a chance to play against some of the top players in the country.”

Sharing his thoughts on the future of such series in India, the MTT crusher said, “Adda52 is pioneering the high roller poker series and it has already gained a lot of traction as a stand out event. I believe Colossus is and will continue to be the marque series among the high roller events in the country.”

Finally, sharing his advice for the new and upcoming players, Sriram said, “Try to play your best and be prepared for the variance since Live poker can be brutal. Keep in mind that you will be in the best casino of the country, so enjoy the game and the entire experience. Wish you all good luck for the series!”

Ready to #UnleashYou? Download the handbook now for the complete schedule of the event HERE!