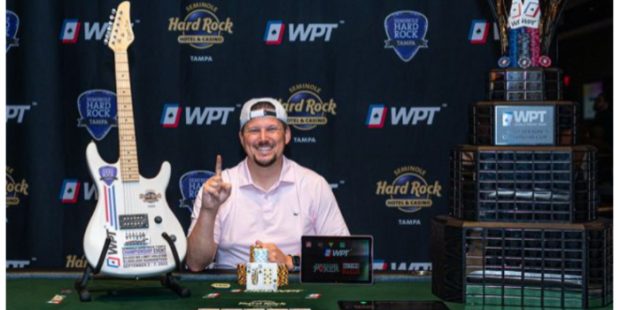 Following six days of the high-octane action, the $3,500 buy-in WPT Seminole Hard Rock Tampa has finally concluded with Corey Wade topping the 1,165-entry field to win it and take home $471,686.

The final table began with Steven McKoy in the lead over Fred Paradis. Three hours into play and there were still six players left. Then, within a span of ten minutes, two players got busted, starting with David Tuthill, who ran into a cooler with Ks Kd against the Ad Ac of Paradis. Not too long after, Seth Berger was sent packing in 5th place. Seven McKoy was next out the door (4th place).

Down to the final three players, the payouts were adjusted for a chop, but players were required to play it down to a winner. Brock Wilson, the most accomplished live MTT player at the final table, was the first to fall. He took home $411,678, his second six-figure score of the WPT Seminole Hard Rock Tampa series. This eventually set up the heads-up between Wade and Fred Paradis.

Wade started the heads-up with a 2:1 chip advantage over Paradis. The latter was able to make headway but his fortune went the other way. Post a preflop raise and jam, Paradis was all in for his tournament life with A-3 against Wade’s Q-9. Both players hit their top card on the flop. On the river, however, Wade found a queen pair to win the pot as well as the tournament, earning $471,686 in top prize. Wade was ecstatic when that queen hit and instantly dropped to the floor in excitement.