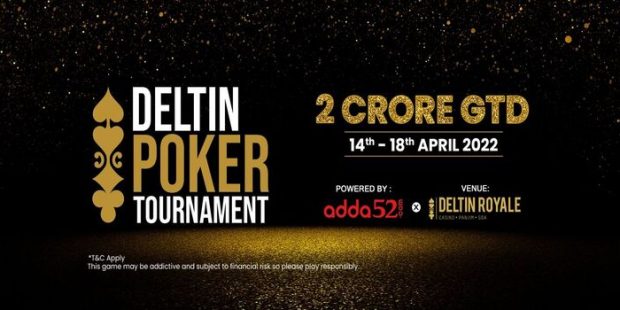 Great news for all of you who have missed playing live tournaments in India, Deltin Group`s flagship tournament offering, Deltin Poker Tournament (DPT), is about to hit the poker shores of India with the two biggest names in Indian poker coming back together. Adda52 presents the Deltin Poker Tournament (DPT) from 14th to 18th April 2022 aboard Deltin Royale in Goa. The five-day extravaganza is an effort by Adda52.com, India’s largest poker site and Deltin Royale, the most luxurious floating casino in India to showcase the best of tournament culture and give you a taste of huge guarantees.

The Deltin Poker Tournament is coming back after nearly two years and players who have been starved of huge guarantees for so long must be happy as it promises a whopping INR 2 Crores in the guaranteed prize pool. Powered by Adda52, the series will be headlined by the INR 1.2 Crore GTD 35K buy-in Main Event from 16th to 18th April. Catering to the high roller fans out there will be a special INR 65 Lac GTD 65K buy-in High Roller, a 2-day event scheduled to run from 15th to 16th April.

Other key events on the schedule include the series opener INR 11K buy-in Warm-Up (Re 8-Max) on 14th  April, 15K buy-in Bounty on 17th April, and a 15K buy-in PLO Bounty, which will mark the end of the series on 18th April. Adding extra value to the series this time will be a 10K Womens Special event on 19th April, which is an exclusive tourney for poker ladies looking to break the stereotype. That is not all, 19th  April will also bring a 15 Lac GTD DPT Freeroll tourney. Isn’t that awesome?

The surprises don’t end here only! The final tablists of 2 Crore GTD Big Millions will be provided with free travel and stay for DPT, meaning they can join the DPT action without paying anything from their pocket for their stay! Overall, this DPT is going to be a stunner with so much on offer for you. So, don’t miss it. Log on to Adda52.com right now and join satellites to win tickets to DPT events!