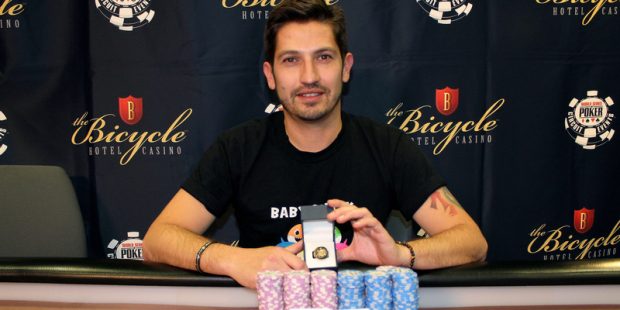 The 2021 World Series of Poker Circuit Bicycle Casino $1,700 buy-in no-limit hold ’em Main Event is in the books with France’s Yoann Gimenez taking it down. The French player outlasted 525 entrants to it for $156,160 and his first WSOPC gold ring as the champion. Notably, this was the biggest live tournament score of Gimenez’s career topping the $26,880 he banked as the third-place finisher in a $1,700 buy-in event at the Seminole Hard Rock Hollywood’s Rock’N’Roll Poker Open in late November.

“It’s been amazing. I’ve been playing poker for a while now. I have a background like cash game players. I’ve been playing MTT (multi-table tournament) a few times, but I’ve been working a lot. For sure I’ve been very lucky, but I also played very well,” Gimenez told WSOP reporters after the win.

“I would like to say thanks to all my crew; My crew here, my crew in France, my girlfriend, parents, and also my crew in Thailand, like all my friends around poker. MTT games are very hard. When you have a victory, you have to enjoy yourself… Now it’s time to enjoy with my friends,” he added.

Gimenez came into the final day sixth in chips with 10 players remaining. He flopped a set of nines to bust David O’Day in 10th for$11,695 to move into the official final table. Derrick Yamada (9th for $14,545) and Thorben Vellrath (8th for $18,330) were the next to fall. Gimenez then picked up pocket aces to score another elimination. Start-of-day chip leader Darrell Lane was at risk with K-J  facing the A-A Gimenez. The aces remained best on the board, and Lane was eliminated in 7th place for $23,415.

Gimenez continued on the elimination spree and completed a hattrick by busting Hennock Fessehaie in 3rd place for $70,905. Finally, it came down to the heads-up between Gimenez and Sun Tongguang. The former held a massive chip lead and did not let his opponent take control. Finally, it all ended with Gimenez winning it.