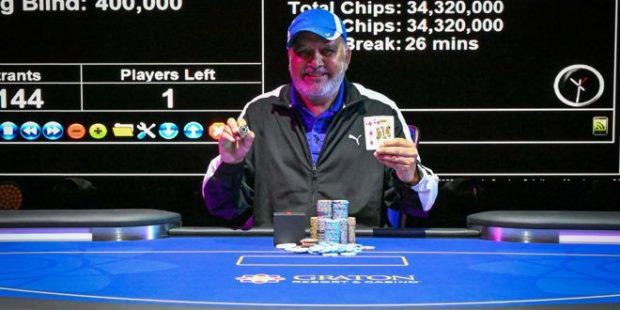 The first RunGood Poker Series(RGPS) stop at Graton Resort and Casino is in the books with the Indian-origin player Kulwant Singh shipping the Main Event after defeating Bryan Saltzman in heads-up. Singh took home the RGPS ring and a career-high $100,070 for his grand victory. Singh, who had over $274,925 live cashes prior to this victory, took his live tournament earnings to $374,995.

Singh’s march to the victory started he scored a double knockout shortly after the three-table redraw. He eliminated both Frank Neuhauser and Gerald Balfour. From there, Singh continued his surge, and he entered the final table with the second largest stack behind Bryan Saltzman

The final table kicked off in a thundering fashion, with a double-knockout of Jeff Spruitenburg (9th) and Max Gratuito (8th). They were busted by Julian Ruvalcaba who moved into the chip lead, bringing the tournament down to seven players. Soon after, Sean Burson was eliminated in seventh place. He shoved with king-queen, only to run into the pocket aces of Saltzman. Following him in sixth place was Matt Massaro who moved all-in with A-3 suited against the pocket nines of Paul Serrate.

The final table eliminations continued with Jose Castillo falling out in fifth place. Castillo shoved with queen-jack that lost to ace-king of Singh. Later, Ruvalcaba got it in with queen-ten and lost it out to Singh’s ace-jack. Singh continued his momentum and busted Paul Serrate in third place with a pair of aces to enter heads-up play with a 3:1 chip lead against Saltzman who managed to close the gap but could not go all the way, eventually settling for the runner-up payout of $69,115. On the final hand, hen Saltzman shoved with a suited queen-nine, but Singh out drew him with king-six to win the title.