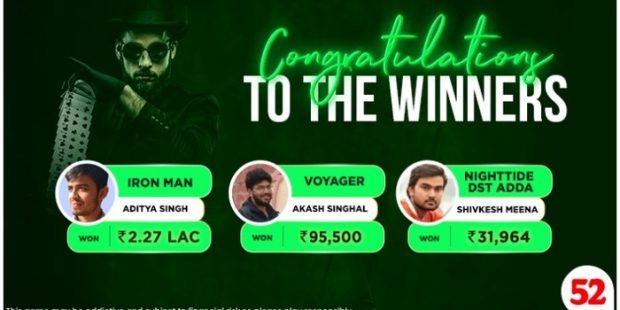 With the 1 Crore GTD Nano Poker Series (NPS) now in the books, Adda52 returned to its weekly scheduled tournaments on Monday. Headlining the day’s MTT list was the 8 Lac GTD Iron Man. Sporting a buy-in of INR 2,200, the Monday flagship drew in an impressive 463 participants, collecting a guarantee-busting prize pool worth INR 9.26 Lac. The top 49 places were paid out, with online MTT regular Aditya “konstantin” Singh walking away with the title and top prize worth INR 2.27 Lac.

The other Monday marquee on Adda52, 3 Lac GTD Voyager, also enjoyed a smashing run drawing in 382 participants to collect INR 3.82 Lac. Walking away with the lion’s share of the prizepool was a known MTT reg in Akash Singhal aka “Hell12 who banked INR 95,500 for the victory. He eventually defeated the user “Checkthat” who banked INR 57,873 for his runner-up finish in the tournament.