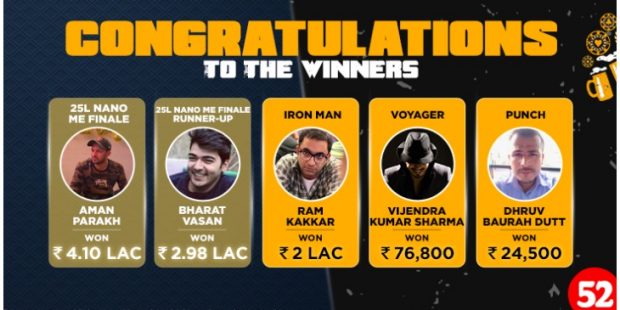 Mondays are usually slow-paced on Adda52.com but yesterday was a little different with several big guaranteed tournaments taking place on the platform. The biggest event of the day was the 25 Lac GTD Nano Main Event that was initially scheduled to run on Sunday, but Adda52 rescheduled it for Monday due to an unexpected server outage. A total of 172 survivors returned to the event’s Finale last night. After a little over five hours of play, the rising star Aman ‘karmapoker’ Parakh took down the biggest tourney of the Nano Poker Series (NPS), banking an impressive 4.10 Lac in the top prize.

The other Monday marquee on Adda52.com, the 8 Lac GTD Iron Man, saw the well-known MTT reg Ram “mowgumotu” Kakkar navigating his way to the top of a strong 351-entry field to win INR 2 Lac in the top prize. The user ‘Padma37’ (runner-up for INR 1.21 Lac) and last night’s Sundown Adda winner Vishal “Mitsen” Singh (3rd place for INR 88,000) rounded out the podium finishers.