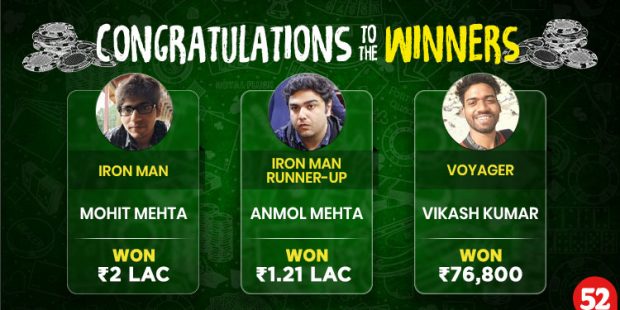 After a long and tiring grinding session on Sunday, most pro players in India consider Monday to be a holiday. However, the leading poker platforms like Adda52.com do not let Monday go by as they conduct several high-value tournaments even on that day. It was an action-packed day on Adda52.com yesterday and many regs and pro players tried their hand at the game.

Here is a quick run down of what went down on the poker site yesterday!

Headlining the Monday action on Adda52.com yesterday was the 8 Lac GTD Iron Man. Featuring a buy-in of INR 2200, the Monday marquee drew 326 entrants by the time late registration closed. Following close to six and a half hours of intense play, the tournament found a winner in online reg Mohit “thejokerrrr” Mehta who walked away with INR 2 Lac in the prize money. Online MTT beast Anmol “anzzzzz” Mehta came close to winning it but eventually finished runner-up for INR 1.21 Lac.

Also on the final table was Pankaj “pankajC” Chaturvedi who finished 3rd for INR 34,500.