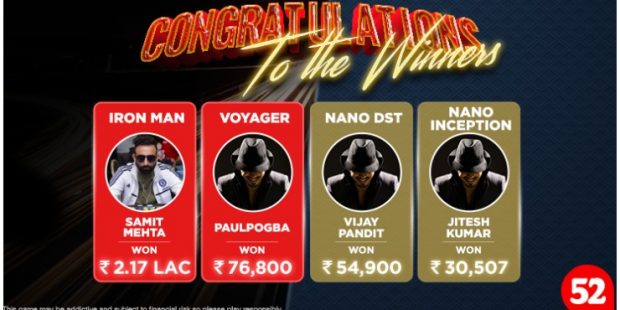 While much of the poker spotlight may have been on the ongoing WSOP 2021, the online grind continues. Setting the online felts on fire was Adda52’s 1 Crore GTD Nano Poker Series (NPS) that commenced yesterday. Sporting a prize pool GTD of 1 Crore and 5 Lac in the leaderboard prizes, the series got off to a good start with the majority of the opening day events of the series crushing their respective guarantees. More than 2000 entrants entered Day 1 of the series and this resulted in a hefty 7.13 Lac prize money for the day. Let us check out the major highlights of the NPS Day 1!

Day 1 of the high-value series had seven events, headlined by the 2 Lac GTD Nano DST, an INR 880 buy-in tourney that found a winner in Vijay “GajaniG” Pandit who outlasted Anish “PapaNegreanu” Arora (runner-up for INR 32,000) in the heads-up battle to win INR 54,900. The other marquee tourney of the day, the 1.70 Lac Nano Inception, was shipped by Jitesh “shooter19” Kumar who finally overcame Raman “Ranzoo9” Arora (runner-up for INR 22,362) to earn INR 30,507.

Adda52`s Monday flagship tourney, the 8 Lac GTD Iron Man, drew 444 participants to comfortably crush its listed GTD and generate a prize pool worth INR 8.88 Lac that was shared by the top 49 players. Walking away with the lion’s share was Samit “fylperus” Mehta who banked INR 2.17 Lac. The user “Pushp14480” placed runner-up and walked away with INR 1,28,760 for his efforts.