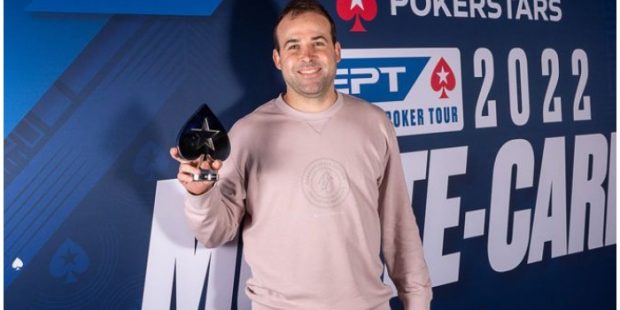 Aimed at offering superlative high-stakes tournament experience, the 2022 PokerStars European Poker Tour (EPT) presented by Monte-Carlo Casino is running full steam. The latest event of the series to wrap up was the €50,000 No-Limit Hold’em High Roller that attracted 34 entrants to create a €1,649,340 prize pool. After over 12 hours of play, Pascal Lefrancois from Canada emerged as the victor and won €505,774, following a heads-up deal with Seth Davies who banked €442,606.

Fresh off of his third-place showing in the €100,000 buy-in event, Mikita Badziakouski money bubbled the event. His exit ensured that the remaining six players all locked up at least €115,450.

WSOP Bracelet winner and two-time Super High Roller Bowl champion Timothy Adams (6th for €115,450) was the first player to finish ITM, with his A-J suited failing to beat the A-K of Lefrancois.

Up next, Seth Davies scored two quick knockouts to bring the field down to just three contenders. First, his A-Q suited made the nut flush against the J-9 suited of bracelet winner Daniel Dvoress (5th for €148,440). A little later, his A-K held against the A-J of recent €25,000 high roller champion Yuri Dzivielevski (4th for €189,670). With that pot, Davies climbed into a tie for the lead with Lefrancois.

The next to fall was the WPT and EPT main event champion Mike Watson who check called all-in on the river with a Kh Js 7h Kd 3d board holding Jd 4h. Lefrancois turned over the Jh 8s for the same two pair with a better kicker to take down the pot and eliminate Watson in third place (€247,400).

That pot gave Lefrancois a significant chip lead over Davies going into heads-up. The duo quickly agreed to a deal, negating the need for heads-up play and rearranging the remaining prize money. Finally, Lefrancois secured the trophy and €505,774, while Davies locked up €442,606 for his efforts.