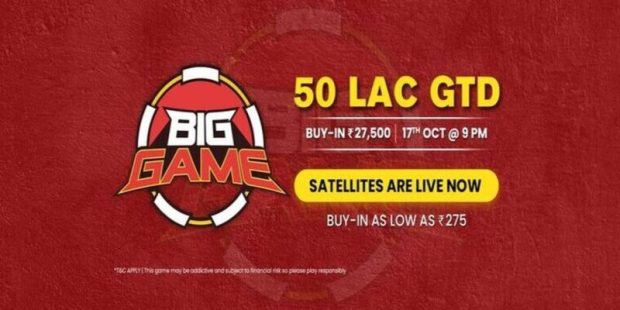 October is already shaping up to be a MARVELLOUS month with a lot to grab on Delta Corp’s market-leading Adda52.com. Making it even more exciting, rewarding and special for you is the 50 Lac GTD Adda52 Big Game, one of the most-awaited high roller tournaments of the month starting tonight at 9 pm! Yes, it is time to dive into the Big Game guaranteeing a whopping INR 50 Lac prizepool. Join this mega event tonight to make your October MARVELLOUS and lay hands on hefty cash prizes!

How To Enter Big Game

Adda52 Big Game running as part of the 11 Crore GTD ‘Oktober Fest’ promotion is a must-play tournament for every poker enthusiast looking to win Big this Sunday. Players can enter the mega tourney directly for INR 27,500 buy-in and win from a massive 50 Lac in the guaranteed prize pool.

However, if the buy-in is outside your bankroll, Adda52 is hosting exclusive satellites for the mega online tourney. Players can compete in the INR 2750 buy-in satellites and win a ticket to be a part of the Big Game without shedding a lot from their bankroll. Alternatively, they can play daily Step Sattys to win a ticket for as low as INR 275. The satellites are already live and will be running till Sunday.

Speaking of the structure, it is a well-structured tourney. Every player will start with a stack of 30K with the progressive blinds starting from 50-100 and Ante starting from level 3. The blind interval will be of 10 minutes, while the late registration for the massive GTD tourney will last till the 25th level.

Six Champions Already Crowned & Could Be The Next!

Adda52 Big Game has been running since the start of 2021 and has grown into one of the most sought after online tournaments in the country. Six successful editions have been hosted so far and the next edition is expected to be a grander success with a bigger turnout expected for the tourney.