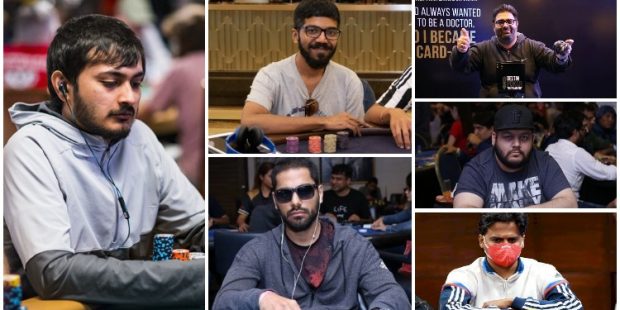 Finally, it is here! One of the most-awaited poker festivals of the year, the Deltin Poker Tournament (DPT) kicks off tomorrow and will run all the way till 19th April. Returning nearly after two years to the Deltin Royale casino in Goa, it is a six-day extravaganza promising a whopping INR 2 Crore GTD prize pool. Powered by Adda52, the upcoming series will be headlined by the 1.2 Crore GTD 35K Main Event from 16th to 18th April and a 65K buy-in High Roller running from 15th to 16th April.

Other exciting events on the schedule include the series-opener 11K buy-in Warm-Up (Re 8-Max) on 14th  April, 15K buy-in Bounty on 17th April, and a 15K buy-in PLO Bounty on 18th April. The series will culminate on the 19th April with a 10K Womens Special event and a 15 Lac GTD DPT Freeroll tourney.  That is not all, the final day of the prestigious festival will see the 2 Crore GTD Big Millions Final Table playing down to a winner, who will take home a stunning trophy and INR 31.63 Lac uptop prize.

Given the long break since a DPT series was last held in Goa, the anticipation for the upcoming DPT is huge and we hope to see a large turnout across all the events. Like every edition, the upcoming edition will see players from all across the country but who are the players to watch out for? Which players are likely to rise to the top? Who will break out for that first DPT Trophy? Which grinder will push through for a huge score in some of the tough field events like the Main Event and High Roller?

Given their recent form and performance in online MTTs, here is a rundown of the top players to be watched out for at the upcoming DPT series. We start with the WSOP bracelet winner Kartik Ved who recently won two Mega Suits titles back-to-back. The WSOP bracelet winner Aditya Sushant, Adda52 Team Pro Arun Sriram, Arjanveer Singh Chadha, and Ashish  Ahuja are the other names on the list.

The WSOP bracelet winner, Kartik Ved, has been in blistering form and has already won more than a dozen of online tourneys this year. Coached by poker pioneer Aditya Agarwal, Ved recently won two Mega Suits titles back-to-back. He also final-tabled the recent BPT 100K High Roller in Goa, finishing 6th for INR 9.80 Lac and hence seems to be well-prepared and warmed up before the upcoming DPT series.

Ved is one of the few Indian pros with a remarkable live and online resume. He is a consistent online MTT crusher and has won over INR 8.03 Crores in online MTTs with over INR 1,85,78,306 of the winnings coming from his grind on Adda52.com alone.

A strong competitor to Ved and others attending DPT April 2022 edition will be the WSOP bracelet winner Aditya Sushant. Ranked 7th in India All-Time with $675,297 in live earnings, Sushant is one of the best live poker players in the country with a WSOP bracelet and more than a dozen of live poker titles to his name. The Chennai pro has the ability to take on the best pros in India as well as abroad and come out victorious. He has been a regular to DPT series and has already won a DPT PLO title.

Talking about his online exploits, his online resume boasts of over INR 5.16 Crores in winnings, including INR 2,60,33,074 coming from his grind on Adda52.com. He is one of the few pros to have won Adda52’s Godfather four times. He has been in terrific form of late and has already won several online tournaments. His fourth Godfather victory worth INR 6.12 Lac had come recently in the wee hours of 1st April 2022. Also, he had finished runner-up in the recent BPT 35K Main Event in Goa for INR 45.23 Lac. So, he has the momentum behind him to make a dominating presence at the DPT.

The third player to watch out for at the DPT is Sahil Chutani, a well-known high-stakes cash game reg with a flair for doing well in live MTTs. A rock solid player with an impressive $170,574 in live earnings, Chutani, who has been playing poker since his college days, has made several FT finishes in India and Internationally. He is yet to win a DPT title. However, he has been doing amazingly on the virtual felts and won several big ticket tournaments including two flagship titles at the IOPC in January.

With over INR 4.75 Crores in online winnings and a massive INR 1,17,05,294 Crores in yearly online winnings so far, Chutani happens to be the most profitable MTT player this year. The four-time Adda52 Millions champion and last year’s WPT India Tuesday Feature champion, he is a terrific poker talent and a renowned coach in the country. Given his consistency and recent form, we can bet on him for the DPT.

Ashish Ahuja is a force to be reckoned with when it comes to tournament poker. The lawyer-turned poker pro has hit many milestones, especially over the last few years. The Chandigarh-based MTT reg crossed INR 9 Crore mark in October 2021 and has now INR 10.87 Crore in online winnings, including over INR 2,60,33,074. He has been in amazing form of late and has won several prestigious online poker tournaments on leading Indian sites, including the DPT 1.35L PKG Online Satty on Adda52.com.

Talking about his live poker resume, it is remarkable with over $176,353 in live earnings. He has been almost regular to DPT and already holds a DPT title to his name. Given his past live poker records and his recent form, he is one player even the top pros would want to see in action at the upcoming DPT in Goa.

While Chadha’s live resume is a little shorter with just a few cashes including a 14th place finish for INR 2,10,000  in the DPT August 2019 Main Event, his online resume is filled with massive scores. The former AOPS Mini ME Finale champion having INR INR 9.91 Crore in online winnings and over 129 tourney titles to his name is another accomplished pro in phenomenal form. In February this year, he finished runner-up to Arun Sriram in Adda52’s ACL Finale in Goa and since then has won over two dozen tourneys on Adda52 alone. Given his past milestones and current form, he is definitely a player to be watched out at the upcoming DPT series in Goa.

The first-ever Adda52 Champions Leaderboard (ACL) finale champion, Arun Sriram, grabbed the spotlight last July when he came out on top of a star-studded field of 182 contenders in the 50 Lac GTD Adda52 Big Game to win INR 14 Lac. He kicked off 2022 with a bang by shipping the ACL Finale in February to win a massive INR 20 Lac and Adda52 Team pro contract. A few days later, he then went on to win another Adda52 Big Game title for INR 19.75 Lac, becoming the only player to win two Big Game titles. Since his second Big Game win, he has won more than dozen of tourney titles on Adda52. With over INR 3.09 Crores in online winnings including more than 1 Crore on Adda52, Sriram is definitely a player to be watched for at the upcoming DPT.

The DPT 2022 promises to be a blast with a massive INR 2 Crore GTD and much more on offer. Come join the series and stand a chance to win from INR 2 Crores. See you there. Good luck!