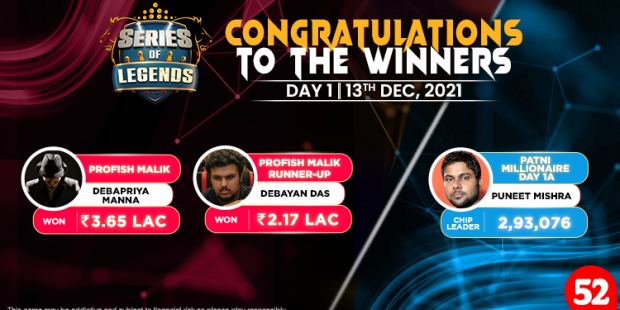 After a long grinding session on Sundays, pros usually consider Mondays as off days. However, this was not the case yesterday with Adda52`s uniquely-branded Series of Legends (SOL) attracting pros in a big number. The series runs from 13th to 19th December and features a whopping 2.6 Crore in the guaranteed prize pool across nine uniquely branded events. Day 1 of the series had two events running. The only SOL event to play down to a winner was the 15 Lac GTD Profish Malik that saw Debapriya Manna overcoming a 458-entry field to take it down for INR  3.67 Lac. The other SOL event, the eight-flight 1 Crore GTD Patni Millionaire, played out its opening flight that ended with Puneet ‘j4jolly’ Mishra (293,076) leading the 13 survivors from the day. Here is a quick recap!

The only event to play down to a winner on Day 1 of the series was the 15 Lac GTD Profish Malik. Named after the veteran poker pro Akash Malik, the INR 3500 buy-in tourney drew a packed field of 458 entrants, and outlasting them all was a former Maverick champion in Debapriya  ‘debapriya_12345’ Manna. He finally outlasted Debayan ‘debz19’ Das (runner-up for INR 2.17 Lac) and banked INR 3.67 Lac for his top-notch finish. Piyush “pokerpassion” Goenka (3rd for INR 1.5 Lac), & Honey “ho9ey” Bijlani (6th for INR 52500) were the notable pros finishing on the final table.

The Profish Malik tourney also had a 5K bounty prize for eliminating poker pro Akash Malik from the tourney. It was the mystery reg “Chidu” who knocked out Malik and earned the 5K as a bounty prize.

Other Winners Declared On Monday