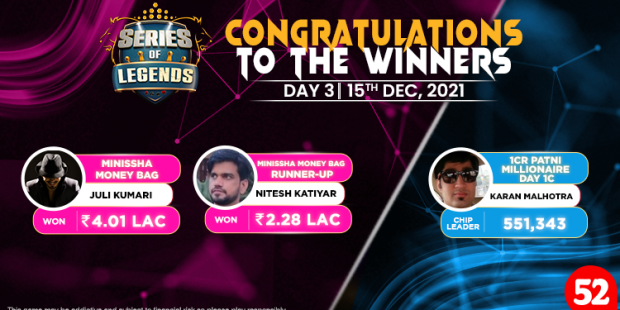 Adda52’s inaugural Series of Legends (SOL) has been grabbing eyeballs rights right from its start on 13th December. The series is now running full steam and Wednesday marked Day 3 of the high-value series on Adda52.com. Like the previous days, Day 3 of the series also had two tournaments running. While we saw plenty of big-name pros battling it out, standing tall above everyone else was none other than Tuesday’s The Courageous Arjan runner-up Juli Kumari who championed the 15 Lac GTD Minissha Money Bag tourney to rake in the biggest score of the day worth INR 4.01 Lac. Also running alongside the Minissha Money Bag was Day 1C of the 1 Crore GTD Patni Millionaire. Karan Malhotra (551,343) ended the day as a chip leader. Here is a quick recap of the SOL Day 3 action!

The only event to play down to a winner on Day 3 of the  SOL was the 15 Lac GTD Minissha Money Bag. Named after Adda52 Celebrity pro-Minissha Lamba, the INR 3000 buy-in tourney logged in an impressive 583 to comfortably crush its listed GTD and create a prize pool worth INR 15.74 Lac. In the end, walking away with the title and top prize was none other than Tuesday’s The Courageous Arjan runner-up Juli “Lily8” Kumari who took home INR 4,01,396 for shipping the Wednesday marquee.

Like other SOL tourneys, the Minissha Money Bag featured a 5k bounty for busting Minissha Lamba from the tourney and it was Neeraj “neeraj2828” Bajaj who walked away with the 5k bounty prize.

With the 127 entries from Day 1A and 190 entrants from Day 1B, the eight-flight event has logged in 467 entries so far, and there are another FIVE flights still left to run before Day 2 (Finale) on December 19 (10 PM).