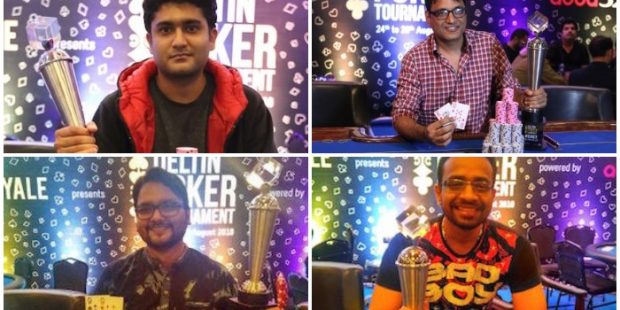 The Deltin Poker Tournament (DPT) came into existence when two industry giants, Adda52 and Deltin Royale casino, came together to create the DPT in  2016. The decision paid handsomely as the very first edition of the series that ran from 21st to 26th January and boasted INR 1 Crore GTD prize pool for the Main Event received overwhelming participation with 450 + entries joining the action and creating over INR 1.5 Crore prize money. The biggest winner to emerge at the series was Delhi’s Raghav Bansal who took home INR 30.60 Lac for shipping the series headliner – 100K Main Event.

Owing to the January edition’s overwhelming success, the DPT returned in August 2016, and this time featured a guarantee for every tourney on the schedule. Thanks to the overwhelming response from the poker community, the series turned out to be a bigger success than its inaugural edition, almost doubling the previous turnout with a whopping 899 entries and generating over INR 2.34 Crore prizepool. Much of this gigantic prizepool was dispersed in the 60K Highroller and 30K Main Event.

While the second edition of DPT saw hundreds of players getting into the action in pursuit of DPT glory and hefty prizes, the biggest winner to emerge at the series was Rohit Tiwari who championed the biggest-guaranteed event (DPT 60K Highroller) to take home a massive payday of INR 27.70 Lac.

The 60K Highroller was the biggest guaranteed event of the second DPT edition and it drew in a record 171 entries, more than doubling its specified guarantee of INR 40 Lac and generating INR 1.02 Crore in prize pool that was shared by the top 18 finishers, with the min-cash being of INR 1,03,000.

Tiwari (613k) started the final table with the third largest stack but gained the control after busting Raghav Bansal in 5th place. He continued his momentum and eliminated Rohit Tiwari. He then went on to bust Manpreet Chadha and Keshav Chadha in fourth and third places respectively to enter the heads-up with Y J Kim that lasted for about 30 minutes. The final hand of the heads-up saw Kd 10d and Kim 7h 10h. The board ran out Qd 8c Jc Qs 3h, giving the pot as well the trophy to Tiwari.

Talking about the DPT Main Event, it did amazingly well, drawing in a record 235-entry field to more than double its GTD and generate INR 70.50 Lac that was finally shared by the top 24 players. Walking away with the lion’s share of the prizepool was Vikas Singh who banked INR 17.60 Lac.

Vikas Singh began the final table as the second-lowest stack, while Naren Prakash held the chip lead. However, he played exceptionally well to stack up and finally win the tournament. He eventually clashed with Rahul Agrawal (2nd for INR 10.90  Lac) in the heads-up that lasted just a few hands.

The final hand of the tourney saw Rahul with 8h 8s and Ah 3s. The pocket eights did not hold up on the Kc 10h Js 7h As board and Vikas took down the pot s well as the title for a massive INR 17.60 Lac.

The second DPT edition had double celebration for IT professional-turned poker pro Tarun Goyal who won the series opener 10 Kickoff for INR 6.35 Lac, as he was felicitated the next day during the 60K Highroller by the then Adda52 Pro Amit Jain and inducted as a member of Adda52 Pro Team.

Goyal started the final table with the third-largest stack but took over the chip lead by the time Manikanta Kona got eliminated in fourth place. He inched closer to the title by eliminating Nayan Kumar in third place. The heads-up began with Tarun Goyal leading 3 to 1 against Prashant (Praz) Correa. The  final hand found Praz all-in with Kh 5d, with Tarun making a snap call with 9d 9s.  The pocket nines held up on the board Js Jh 6c Qh 3c, giving Goyal the coveted pot as well as the title.

Like the other events of the DPT series, the 10K Kickoff tourney also fared well, drawing in an impressive 256 entries and collecting a prize pool of INR 25.60 Lac to easily crush its 10 Lac guaranteed prize pool.  The prizepool was shared by the top 25 with a min-cash worth INR 20,000.

The series finally culminated on a big note with the 15K Adda52 Pro Bounty drawing in 160 entries and more than doubling its specified GTD with a collection of INR 24 Lac prizepool. The top 21 places were paid out in this event and walking away with the title and top prize was Gaurav Gala who banked INR 4.95 Lac. Sumit Ralhan placed runner-up and took home INR 305,000 for his deep finish.

Get ready for the next edition of the series starting on 14th April and become the next DPT champions!