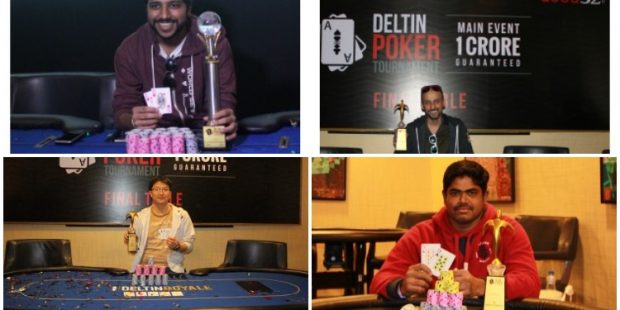 With the first Deltin Poker Tournament (DPT) of 2022 being just few days away, we decided to take a look back and relive the top moments and highlights from the inaugural DPT held at the Deltin Royale casino in Goa. The first-ever DPT running from 21st to 26th January 2016 is remembered as a trailblazer in the history of Indian tournament poker. Featuring a massive INR 1 Crore guarantee for the 100K Main Event, the 6-day poker festival received an overwhelming response with players from all across the country coming out in big numbers and making it a resounding success. More than 450 entries enrolled in and over INR 1.5 Crore in prize money was distributed through the series.

The crowning glory of the inaugural series was the 1 Crore GTD DPT Main Event, which turned out to be a smashing success with a guarantee-busting 102-entry field. The tournament had a dream ending for Delhi’s Raghav Bansal who defeated his fellow city man Akash Malik (2nd for INR 18,87,000) in the heads-up to win the title for INR 30.60 Lac and earn the distinction of becoming the first-ever DPT Main Event champion. Raghav (623k) entered the final table with the second largest stack behind Dhaval Mudgal and played some top-notch poker to eventually clinch the coveted title. He eliminated 6 players on the final table to enter the heads up with Akash Malik. On the final hand, Raghav bet 80,000 and Malik shoved all-in. Raghav made the call and turned over Kh Qh against the Ac 4h of Akash. The board 6d Ks 4s 3h 8h gave both the players a pair but Raghav took it down with King-pair.

The Main Event paid out the top 12 finishers, with Aman Dhamija (12th), Anirban Das (11th) and Sumit Asrani (10th) being the other players who made it to the ITM list in the prestigious tournament.

The second biggest attraction of the first-ever DPT series, the Adda52 25K Deepstack Event, was taken down by the popular poker pro Y J Kim who took home a hefty INR 7.10 Lac, following a three-way deal with Manoj R (2nd for INR 7,35,000) & Nitesh Baliyan (3rd for INR 6,85,250). Kim started the final table as one of the shortest stacks, far behind the start of the  final table chip leader Jagdeep Singh (291,300). However, he played some splendid poker to stack up and eventually take it down to earn the distinction of becoming the first-ever Adda52 25K Deepstack champion.

The tourney ended with a thrilling hand where Kim opened to 50K and Manoj went all-in, which Kim tank-called and turned over 5d 5c against Ac Jd of Manoj. The pocket fives held up on a runout of 2d 10h 2c 6d 7s, giving Kim the pot and the title.

The top 12 places were paid out from the INR 35 Lac prizepool. Zarvan Tumboli bubbled the tournament and after 3 more eliminations of Praveen Dwarakanath (12th for INR 70,000), Anirudh Bakshi (11th for INR 78,000) and Vikranth Varma (10th for INR 87,500), it came down to the final table where Jagdeep Singh (291k) started as the chip leader but in the end it was Kim who emerged the winner.

The top 12 places were paid out with a min-cash of INR 22,000. Jayant Yewale bubbled the tournament and after 3 more eliminations Sumit Sapra (12th), Deepanshu (11th) and Sujith S (10th), the tournament came down to the final table that began with  Vinayak Malani (223,000) holding the chip lead. Shravan Chhabria (67,000) began the FT as one of the shortest stacks though he did amazingly well to build the stack and eventually ship it. On the final hand,  Shravan went all-in with Kh 7h and Vinayak called with As 6d. The board  10h Jc 2c Ks 3c gave Shravan a pair of Kings to win the title.

The organizers had announced the last lady standing prize of INR 10,000 which Shalini Bhandari won and she also made it to the final table (7th for INR 44k), earning a total of INR 54,000 from the tourney.

The first-ever DPT kicked off with a 5K Warm-Up that saw Shekhar VP from Bangalore overcoming a guarantee-busting field of 157 entries to win the coveted trophy and INR 160,000 in top prize money.

Shekhar began the final table in the middle of the pack with a 99,000 stack but played exceptionally well to win the title. He gained the control after busting the start of the FT chip leader Rishab Gupta (4th for INR 50,500) and did not look back from there. He finally entered the heads-up for the title with Alexey who could not go all the way, eventually settling for the runner-up payout worth INR 98,000. On the final hand of the tourney, Shekhar shoved all-in and got a snap call from Alexey. At showdown:

Alexey had a top pair and a straight draw on the flop Ac Qs 10s but with 8h on turn and Js on the river, Shekhar shipped the title. “Feeling good..! Final table was challenging. Didn’t want to chop, doesn’t matter whatever place I could have ended up but I did it finally”, said Sekhar on his first DPT title win.

Top 18 players were paid out with Shravan Chhabria (18th for INR 8,000) being the first ITM finisher.

To make this event more exciting for the female poker players, the organizers had announced INR 10,000 for the last lady standing in the tournament, which Sheena Sareen won finishing in 23rd place.

Congratulations to the first-ever DPT champions and a big shout out to the Indian Poker Community for their overwhelming participation in the series. From its launch in January 2016, the DPT has grown into one of the most-sought after poker festivals in India and no liver poker enthusiast wants to miss the festival. Thanks to the DPT organizers as they continue to propel the game to greater heights and look forward to seeing you for the next edition of the DPT, which features a massive INR 2 Crore GTD and runs from 14th to 19th April 2022. Come join the series and become the next DPT champion! See you there in Goa……Good luck!!