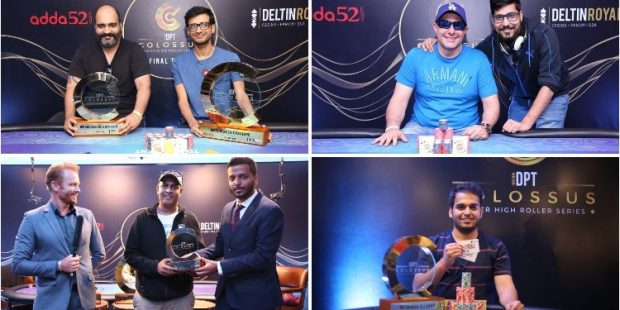 With the third edition of the Colossus Series just a few days away, we decided to take a trip down memory lane to relive those good old memories and moments from the second edition of the series that took place from 2nd to 5th May 2019 in its home Deltin Royale casino, Goa. As one could expect, the series once again drew in some of the biggest names of the poker industry and was filled with some nail-biting moments, both from the felts and off the felts. Adding zing to the mega series was the live streaming of the final table action from the 200K Main Event and 50K Warm-Up tournaments.

While we saw several big winners at the prestigious series, it had a dream ending for India’s poker super star Aditya Agarwal who overcame a star-studded field of 42 entries to win the series’ showstopper 1 Crore GTD Main Event, winning a massive INR 31 Lac and making him the biggest winner at the series. A beast on both live and online felts, Agarwal entered the event late on Day 2 and enjoyed an exceptional run to make it all the way to the final table with the second-largest stack.

Agarwal’s final table dominance started after he finished off Pradep Sharma in 6th place and then went on to eliminate Kunal Patni in 4th place. He continued his momentum and finally entered the heads-up with the seasoned pro Jasven Saigal. He began the duel with 1.5 Million over Saigal’s 971,000 chips. It was a back and forth battle with Agarwal finally winning it for a whopping INR 31 Lac in prize money.

Saigal too had a remarkable journey on the final table. He  played in a disciplined manner,  steadily building his stack. He eliminated Alok Birewar and Madan Kumar, before his heads-up duel with Agarwal. He was gunning for a fourth DPT title and looked in good shape, but it was not meant to be. Following a short break for a possible deal discussion, Agarwal changed the gears, snatching the title. On the final hand, Saigal went all-in with 8s 7c and Agarwal called with Kd 3d. The board J-5-4-J-5 blanked and Agarwal’s King kicker held on, giving him his first-ever DPT title and INR 31 Lac payday.

Top 7 players were paid in the main event with a min-cash of INR 6 Lac. Here is a look at final results:

The series opener, 50k Warm-Up running from 2nd to 3rd May 2019, registered a total of 66 entries with top 9 players finishing in the money. The INR 50K buy-in event crowned a champion in a well-known tournament regular Meherzad Munsaf. The veteran pro had had finished 6th for INR 2.42 Lac in the same event in 2018 and finally got the monkey off his back by shipping it for INR 10.80 Lac. Munsaf entered the final table with the third-biggest stack and went on to eliminate the likes of Vidur Singhal, Kunal Patni, Aditya ‘Bitti’ Agarwal, Praveen Dwarkanath and Rajat Sharma on his way to the heads-up confrontation with the 2018 WSOP ME best Indian finisher Nishant Sharma, who could not go all the way and finished runner-up for INR 6.20 Lac. On the final hand, both players moved all-in. Munsaf held Ks Jh, while Sharma had pockets tens, which did not hold up on the 7s 6c 3s Js 4c run out.

The Last event of the series, 25K Bounty hosted from 4th -5th May 2019, was a fast-paced event and it was shipped by Atul Kumar who bested a field of 41 entries to bank INR 2.20 Lac in top prize money.

Specially curated for the bounty lovers, the tournament had several prominent pros in the field, but it was the new and upcoming player Atul Kumar who stole the show. Atul dominated the nine-handed final table, knocking out Girish Nair and Vidur Singhal to enter the heads-up with Abhinandan Sarda. Kumar started on the back foot but came back from behind to relegate Sarda to the runner-up spot.

Congratulations to the winner from the second edition of Colossus and good luck for the upcoming edition slated to run from 2nd to 7th August 2022 at the Deltin Royale casino in Goa. The upcoming series promises to be bigger and bolder with hefty prizes and the shiny gold, silver & bronze trophies up for grabs. Come join the series to #UnleashYourself and become the next Colossus champion!