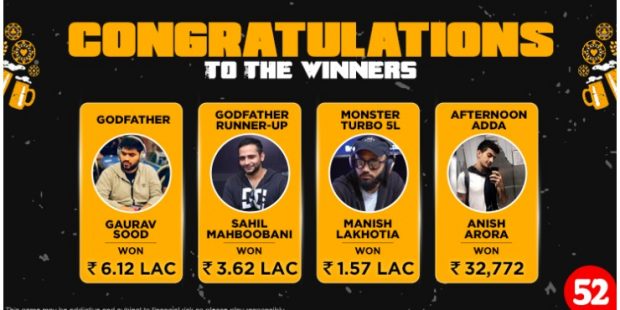 With the weekend approaching, online action has picked up the steam. It was a thundering Thursday with all leading brands conducting high-value tournaments yesterday. Headlining the day’s action on India’s largest poker site Adda52.com was the Thursday flagship, the 25 Lac GTD Godfather. The INR 5500 entry buy-in tourney saw online MTT crusher Gaurav “gauravarod” Sood overcoming a strong 467-entry field to win INR 6.12 Lac, the single largest score of the day on Adda52.com. Finishing right behind him was none oher than the four-time Godfather champion Sahil Mahboobani aka “imhighishove” who banked INR 3.62 Lac for his runner-up finish. Sood has already taken down a plethora of flagship events on Adda52.com and this was his second time winning the Godfather.

Thursday on Adda52.com belonged to the top MTT pros and crushers. Featuring among the other Thursday chartbusters was Manish “newkidpoker” Lakhotia who championed the site’s 5 Lac GTD Monster Turbo for 1.57 Lac. Lakhotia was in a terrific form last night as he also finished 6th in the Godfather for INR 87,500, collecting over INR 2.44 Lac in Thursday winnings on Adda52.com.