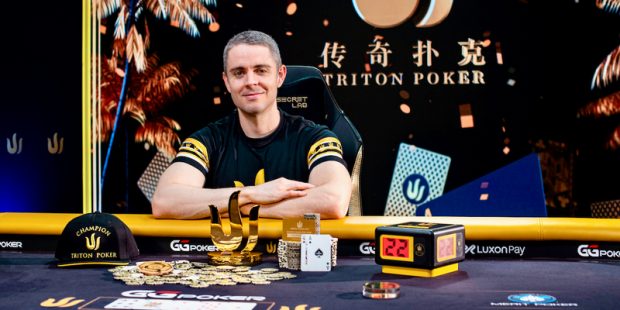 USA’s Ben Tollerene, who was playing his first live tournament after three years, puled out a smashing run, winning Event #2: $30K No Limit Hold ’em 6-Handed of the 2022 Triton Poker Super High Roller Series Cyprus for $ 807,000 after a swingy heads-up with Brazil’s Yuri Dzivelevski (2nd for $749,073).

The last time Tollerene cashed in a live poker tournament was a £100,000 buy-in event win at the 2019 British Poker Open. Three years after that victory, Tollerene made a triumphant return to the live scene by winning $30,000 No Limit Hold ’em 6-Handed of the 2022 Triton Poker Super High Roller

“I’m very tired,” Tollerene told Triton Poker reporters after winning the event. “I was sort of stressed because I haven’t played poker in a while and I was struggling to remember everything.”

The tournament recorded an impressive 123 entries for a prize pool of $3,698,100. Only the top 17 finishers were paid out, with recent WSOP Online bracelet winner Pieter Aerts bubbling the event.

The final day of the two-day event began with 17 players returning to the felts with Viktor Kudinov in the lead. Kudinov ultimately finished in 7th place, setting up the official six-handed final table led by two-time bracelet winner Yuri Dzivielevski. Ignacio Chavero was the first to fall at the final table. After more than 90 minutes of six-handed action, the Spanish player shoved for a little shy of five big blinds with K-9 and got a caller in Dzivielevski who Q-10. The latter spiked a ten on the river to win the hand.

Poker coach and two-time bracelet winner Fedor Holz whose stack had dwindled to around seven big blinds was the next player to leave the final table. His A-7 were bested by Tollerene’s K-Q with the latter flopping a queen pair to take it down and bust Holz in 5th place. Triton first-timer Alex Keating’s run in this event came to an end when he jammed with K-2 suited from the button. Tollerene called all-in with A-10. Tollerene flopped an ace and then held from there, busting Keating in 4th place.

Stephen Chidwick was the next to hit the rail. On the flop Qd 9h 4h, he shoved Jh 8s and Dzivelevski called with Ah 5d. The 9s on the turn and 7s changed nothing and Chidwick was eliminated in 3rd place.