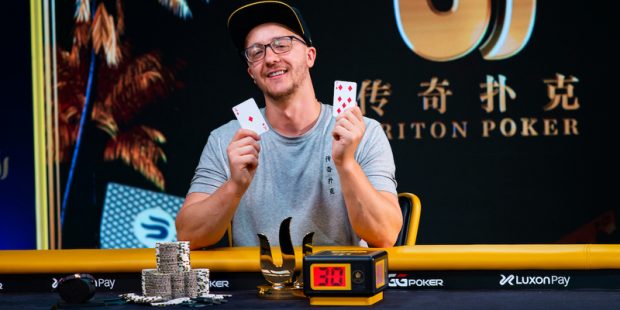 This was the third time that Burns cashed for seven figures in a poker tournament and has nearly $14.3 million in lifetime earnings. With this win, he moved to the second spot on the Australian all-time money list, thus surpassing 2005 WSOP main event champion Joe Hachem ($12.4 million).

Santosh Suvarna (8th) was the first to fall at the final table, with his A-8 failing to best the K-Q of Linus Loeliger. He was followed by Artem Vezhenkov whose K-J got beaten by the J-9 of Burns. Despite Loeliger scoring the first knockout at the final table, he was finally sent home in 6th place. Following him was Talal Shakerchi who was eliminated by Burns in 5th place. Yuri Dzivielevski was the next to fall. He got his stack in with A-9 dominating the A-4 of Burns who rivered a straight and won the pot.

Down to three players, WPT champion Seth Davies picked up pocket jacks and called all-in facing a shove from Burns, who held A-9. Burns flopped an ace and held from there to bust Davies in 3rd place.

Finally, it came down to the heads-up between Burns and Greenwood with the former holding a 3:1 chip lead. While the Canadian was able to close the gap, Burns remained and finally shipped it. On the final hand, Greenwood moved all-in with 4d 4c and Burns called with Ad 7d. The board ran out 9s 6c 7h 7h 5c, giving the pot and title to Burns. Greenwood secured $1,210,000 as the runner-up finisher.