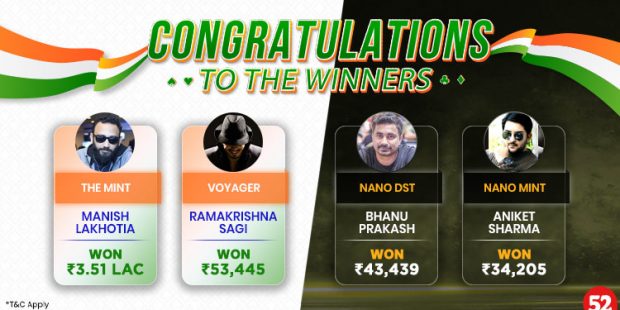 It was an action-packed Tuesday on Adda52.com with several exciting tournaments taking place on the platform, including 14 Lac GTD The Mint and seven events on Day 2 of the Nano Poker Series.

Leading the charge was the 14 Lac GTD The Mint that featured a buy-in of INR 3,850 and drew in an impressive 405 entrants to generate INR 14.17 Lac in prize pool. While the top 43 places were paid out, walking away with the title and top prize was Manish “newkidpoker” Lakhotia who banked INR 3.51 Lac for his win. This was the second The Mint title for the poker pro from Siliguri. He defeated “ratansanu” in the heads-up last night, with the latter banking INR 2,12,625 for his runner-up finish.

Ramakrishna Sagi aka “KAdiamonds” was the last player standing in Adda52’s 2.5 Lac GTD Voyager. He overcame a guarantee-busting field of 251 entries to win the Tuesday marquee for INR 53,445. Sagi eventually struck a heads-up deal with Yash “Babyshark21” Chitre (runner-up for INR 50,720). Rounding out the podium finishers was Mohit “Betoo” Singh who finished 3rd for INR 29,242.

Playing out on Day 2 of the 1 Crore GTD Nano Poker Series (NPS) on Adda52.com were a total of seven tournaments. Headlining the list was the 2 Lac GTD Nano DST that found a winner in Bhanu “ChennaiNo1” Prakash KC who earned INR 43,439. Online MTT reg Aniket “WhiteRabbit” Sharma was the last player standing in the 1.9 Lac GTD Nano Mint tourney and won INR 34,205 for his victory.

The action ahead is set to get intensified with the 25 Lac GTD Nano Main Event kicking off today with its opening flight Day 1 A at 8 PM.  The multi-day event features a buy-in of just INR 1,650 and offers insane value with a hefty INR 25 Lac in guaranteed prize pool. Day 2 of the event scheduled for 21st August at 10 PM. So, if you are looking to win big at a small investment, don’t miss the Main Event!