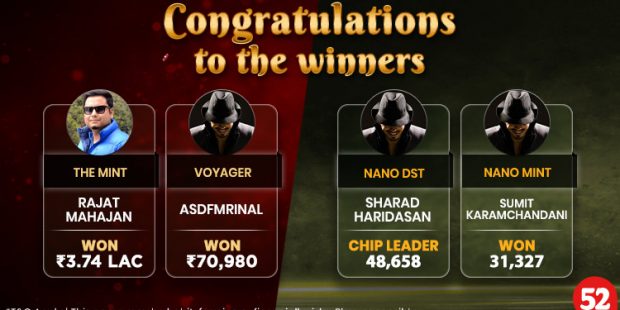 The week got off to an exciting start on Adda52.com with the 1 Crore GTD Nano Poker Series (NPS) featuring an additional 5 Lac in leaderboard prizes. Tuesday marked Day 2 of the series and had an impressive seven tournaments on the schedule. The headliner of the day was the 2 Lac GTD Nano DST where Sharad ‘Zimbawe’ Haridasan topped a field of 286 entrants to win it for INR 48,658.

The rest of the week is going to be even more exciting, and today we have the 25 Lac GTD Nano Main Event kicking off with its Day 1A at 8PM. The finale of the event will take place on 10th July.

The featured tourney on Tuesday was the 14 Lac GTD The Mint and it did well on its guarantee with an impressive 436 entrants entering the event and generating a massive INR 15.26 Lac in prize pool. After a little over seven hours of gruelling action, the online MTT crusher Rajat “happyfish” Mahajan shipped it to bank INR 3.74 Lac, with Mohit “thejokerrrr” Mehta placing runner-up for INR 2,21,270.

Another high-value event on the Tuesday roster on Adda52.com was the 2.5 Lac GTD Voyager that also fared well, drawing in 273 entrants and generating a guarantee-busting INR 2.73 Lac prize pool. In the end, the user ‘asdfmrinal’ emerged victorious and earned INR 70,980. He eventually bested online reg Shrey “kingsb30” Baj in heads-up. The latter walked away with INR 42,315 for his efforts.