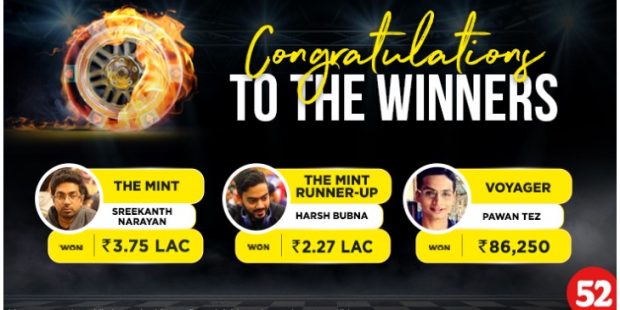 Tuesday was a lot more exciting compared to a little dull Monday on Adda52.com. Headlining the list of plethora of tournaments on the poker site was the 14 Lac GTD The Mint. The INR 3850 buy-in event  did really well, logging in an impressive 432 entries to crush its GTD and create a prizepool worth INR 15.12 Lac. The top 43 places were paid out, with Adda52 reg Sreekanth “n0thing” Narayan walking away with the top prize and the title. He eventually defeated the inaugural Patni Millionaire Finale champion Harsh “harsh1327” Bubna (runner-up for INR 2.27 Lac) to bank INR 3.75 Lac prizemoney.

The other Tuesday marquee on Adda52, the 3 Lac GTD Voyager sporting a buy-in of INR 1100 also fared pretty well and generated a guarantee-busting prizepool of INR 3.45 Lac on the back of 345 entries. The tournament was eventually taken down by online MTT crusher Pawan “_luffy_1x1” Tez  who walked away with INR 86,250. Hemant “hemant11300” Ghusinga placed second for INR 52,268.