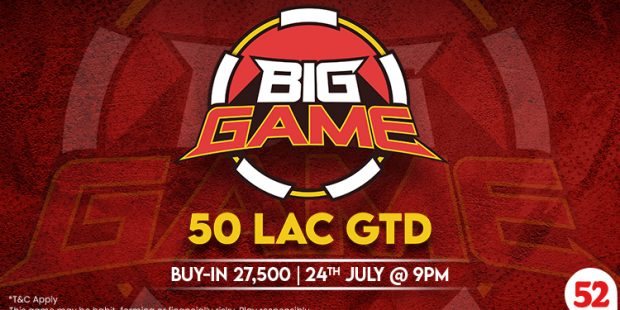 July has been quite jubilant on Adda52.com and has already witnessed a lot of Jashn with the ‘Jashn-e-July’ promotion on the site. Adding fireworks to the month is the 50 Lac GTD Adda52 Big Game. Yes, the biggie is returning this Sunday (24th  July), and we can already feel the heat with a plethora of contests and satellites running for the highly-anticipated high roller tourney.

Featuring INR 27,500 buy-in, the tourney promises insane value with INR 50 Lac in the guaranteed prize pool and is a must-play tournament for every serious MTT lover looking to give his/her bankroll a massive boost. And it is not just a platform to win mega prizes, but also a golden chance to rub elbows with India’s top regs, learn from them and hone your skills.

Speaking of the Big Game structure, it is a well-structured tourney in six-max format. Each player will start with a stack of 30K. The blinds start from 50-100 with Ante starting from level 3. The blind interval will be of 10 minutes, while the late registration for the tourney will remain open till the 25th level.

If the buy-in sounds a little steep for your bankroll, now worries! Adda52 is hosting the daily INR 2,750 buy-in satellites and INR 275 buy-in step satellites to the mega tourney. Players can compete in the INR 2,750 buy-in satellites to enter the Big Game without shedding a lot from their bankroll. Alternatively, they can play the INR 275 buy-in Step Satellites and win a ticket to the mega tourney for just INR 275.

Two Champions Already Crowned This Year & You Could Be The Next!

Ever since it started in January last year, the Big Game has been receiving plenty of attention from online poker players due to its higher ROI. A total of two editions of Big Game have taken place this year so far and both of these editions have wrapped up with grand success. The first one was hosted in February this year and emerging victorious was the inaugural Adda52 Champions Leaderboard (ACL) Finale champion Arun “runyrules” Sriram, who walked away with INR 19.75 Lac. The second Big Game of the year took place  just last month and was shipped by Prem Madderla aka “Chutny”, who banked a career-best INR 19.39 Lac in top prize.

Bring your A-game to the table & become the next Big Game champion this Sunday! Good luck at the tables!