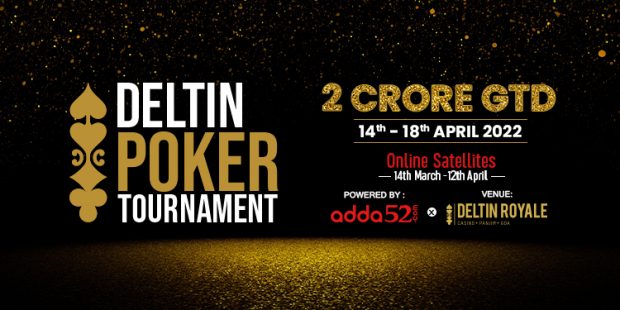 Big news for the live poker fans! India’s premier live series, Deltin Poker Tournament, is back and will run from 14th to 18th April onboard Deltin Royale casino in sunny Goa. The series promises the best of tournament culture and gives a taste of huge guarantees as it features a whopping INR 2 Crore GTD prize pool and comes packed with several exciting events in varied interesting variants and formats. The series will be headlined by the 35K buy-in Main Event featuring INR 1.2 Crore GTD and running from 16th to 18th April. Other events apart from the Main Event include the 65 Lac GTD 65K buy-in High Roller, 11K buy-in Warm-Up (Re 8-Max, 15K buy-in Bounty, and 15K buy-in PLO Bounty.

Adding zing to the series this time will be a 15 Lac GTD DPT Freeroll and a 10K Womens Special on 19th April, which is a must-play tourney for all the ladies out there looking to break the stereotype.

Apart from the conventional live satellites that will be running at Deltin Royale during the series, Adda52 is hosting exclusive online satellites so players can attend the festivities without making a dent in their pockets. Already underway from 14th March and running till 12th April, the satellites qualify as many as 26 players for the Main Event & High Roller, and on top of that award 4 packages.

Each Package is worth INR 1.3 Lac and guarantees tickets to the 35K buy-in Main Event and the 65k buy-in High Roller along with 4 Nights /5 Days Twin-sharing accommodation and flights tickets reimbursed up to INR 14,000. Adda52.com is currently hosting three exclusive satellites for DPT:

The satellites for the DPT Main Event are already underway and will be running till 12th April. Players may choose to take part in DPT 35K ME Satty running at 10pm for a mere INR 3500 buy-in. They can also compete in DPT 35K ME Step Satellite and win a ticket to the Main Event for as low as INR 350.

The DPT 65K HR Satellite on Adda52.com features INR 6500 buy-in guaranteeing 4 seats into the 65 Lac GTD DPT High Roller. One seat has already been awarded, meaning there are now only 3 seats left up for grabs. Compete in this exclusive satellite at 10pm on 26th March, 2nd April & 9th April and win a seat to the DPT High Roller for just INR 6500. Take part in DPT HR 65K Step Satellite on the same dates and stand a chance to enter the DPT High Roller tournament for as low as INR 650.

The biggest and the most exciting satellite running is the DPT Package Satellite featuring INR 11,000 buy-in and guaranteeing 4 packages. This exclusive satellite kicked off on 20th March and will be running 3 times more, i.e. 27th March, 3rd April, & 10th April. Running on the same dates will be a DPT Package Step Satellite where you can stand a chance to win a DPT Package for just INR 1100.