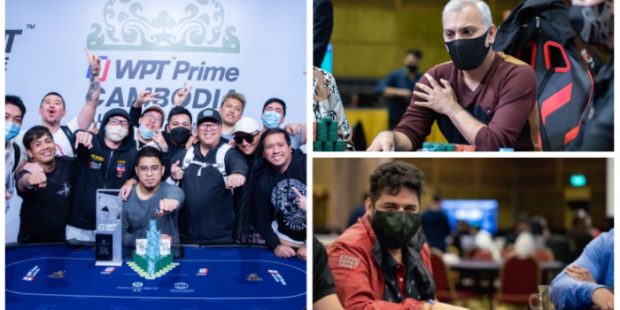 After an exciting final table, the World Poker Tour (WPT) Prime Cambodia 2022 Main Event has finally concluded with Filipino pro David Erquiaga clinching the title for $137,008. Following five days of play at the NagaWorld Integrated Resort in Phnom Penh, the Main Event ended in a three-way deal with Chi Jen “Justin” Chu (runner-up for $120,980) and Junnie Pamplona (3rd place for $106,482).

The final hand of the event saw David Erquiaga pushing all-in and Chi Jen Chu called at the risk of his tournament life. Erquiaga held Jh 10d, while Chu had Kd Js. The board ran out 10h 8s 8d 3d 8h where Erquiaga flopped pair of tens to win the WPT Prime Cambodia Main Event title and trophy.

It was an interesting event for the Indian rail with two Indians being on the final table. All eyes were on Adda52 Game Ambassador Kunal Patni, who began the FT with a massive stack. Unfortunately, he lost his chip advantage by the time it came down to six players. Eventually, he exited in 6th place after his ace-ten lost out to the ace-king of Junnie Pamplona who rivered a straight. Nevertheless, the Deepstack NLH champion earned an impressive $35,690 for his deep run in the Main Event.

The second Indian finishing on the final table of the Main Event was Ankit Jajodia who started the final table with the sixth largest stack. However, he exited the event in seventh place for $27,510.

The WPT Prime Cambodia 2022 Main Event will be remembered for its record-breaking turnout. The event attracted 1,050 entries and generated a $1,018,500 prize pool, making it the biggest live poker event in Cambodia and the largest WPT event in Asia. The top 131 players were paid out in this event and 23 among them were Indians, including WSOP bracelet winner Abhinav Iyer (10th for $16,880).