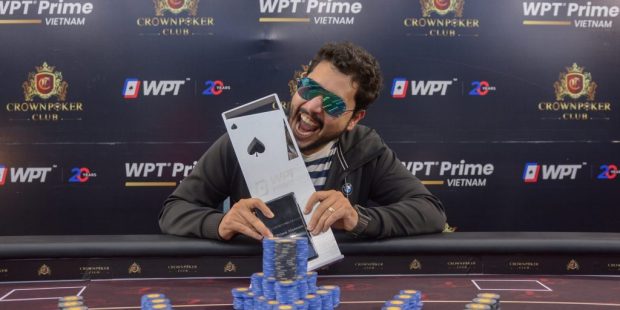 Finally, the World Poker Tour (WPT) has crowned its first ever WPT Prime Main Event champion and it is none other than India’s ace player Zarvan Tumboli who overcame a record field of 777 entries and a tough final table to earn career high $131,394 (approximately INR 1.02 Crore). He eventually outlasted fellow pro Ashish Munot at heads up to clinch the first ever WPT Prime Main Event title.

The VND 25 Million ($1,080) buy-in event ran from May 26 to 30 and logged in a record 777 entries, making it the biggest one for WPT in Asia. The action unfolded at Crown Poker Club in Hanoi, Vietnam from . Day 2 of the event saw 97 players returning for one of nine seats on the final table.

Interestingly, the 9-handed final table had not one but two Indian players and it was set Zarvan Tumboli (6,550,000 – 131 BBs) holding a commanding lead. Giving him company on the FT was the fellow pro and the 018 WPT India Main Event champion Ashish Munot (1,025,000 – 21 BBs) who did amazingly well, stacking up nicely and reaching the heads-up against his fellow country man Tumboli. It was a historic moment for India as it was the first time that we saw two Indians battling it out for the WPT main event title. Finally, this historic dual ended with Tumboli emerging victorious.