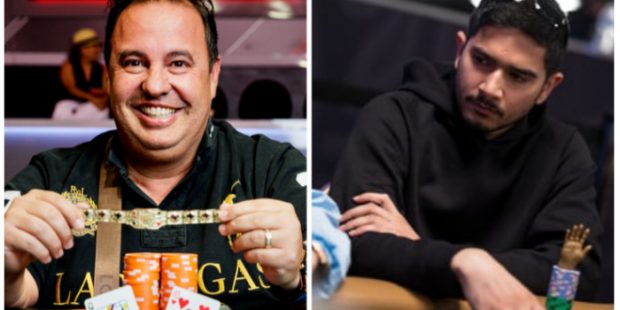 Tamas Lendvai is the latest gold bracelet winner crowned at the World Series of Poker (WSOP) 2022. The Hungarian player emerged victorious in Event #57: $600 Deep Stack Championship No-Limit Hold’em, topping the field of 4,913 players, who generated a prize pool of $2,505,630. Lendvai took home $299,464 of the total $2,505,630 prize pool and his career-first WSOP bracelet. He defeated German player Frank Reichel (runner-up for $185,027) in heads-up to capture the hardware.

“Since I’ve been playing poker I’ve been dreaming about this moment so what can I say… It means the world. It means everything and more for me and for my family,” Lendvai told WSOP reporters after his massive bracelet victory. “I did this for my dad, who’s battling cancer now. Dad, let’s do it.”

The event ran for four days and the final day began with just seven players remaining and Alex Jim in the lead. Lendvai (7,800,000) was the shortest stack coming into day 4, with just 8 BBs. However, he managed to chip up nicely and ship the title within just two hours. He was able to put pressure by moving all-in. While most of his jams received no callers, he turned over the the goods when he did get a caller.

Tsuf Saltsberg became the first elimination of the day when his pocket aces were cracked by the A-10 of Frank Reichel. Following his elimination, Lendvai doubled up through the longtime online MTT grinder Jon Van Fleet to continue chipping up. He then picked up pocket aces, which held against the pocket queens of Abdullah Alshanti who exited in seventh place, bringing the field down to five.

Lendvai continued his surge and eliminated Daniel Marcus in fifth place, with his pocket fives winning a race against A-J. Up next, Jon Van Fleet bested start-of-day leader Jim in fourth place. The chips went in preflop with Fleet’s A-9 vs K-10. Both players flopped a pair, but aces remained the best.

Despite scoring the knockout, Jon Van Fleet was the next player to fall out and sending him to the rail was none other than Lendvai. After losing a substantial chunk of his stack to Lendvai in the previous hand, Fleet opened and then four-bet shoved over the three-best of Lendvai with Ad 10c.  Lendvai snap-called with pocket aces. Van Fleet failed to come from behind and exited in third place.

Lendvai started the heads-up with a massive lead over Frank Reichel and  did not take long to convert his lead into the title. On the final hand, Lendvai open-shoved from the button with Qs 10h and Reichel called with Kd Qd. The board ran out 10d 9h 4s 7h 10s  where Lendvai made trip tens to secure the title. Unfortunately for Reichel, he had to settle for $185,027 as the runner-up finisher.

There was only one Indian to cash in this event and that was Nathan Rao. He exited it on Day 2, finishing 216th for $1,902. This  marked his second cash at the ongoing series, with his first score coming in Event #49: $2,000 No-Limit Hold’em where headlined three Indians, finishing 20th for $18,930.