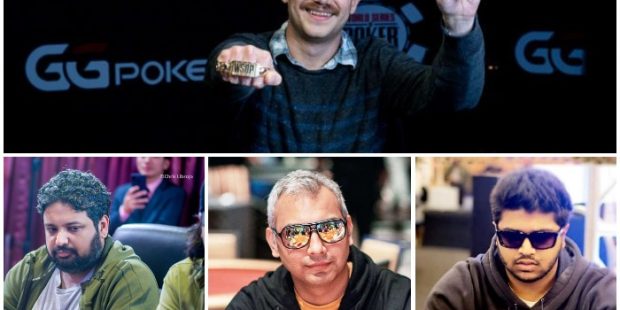 Another day, another champion crowned at the 2021 World Series of Poker (WSOP). The latest tournament to conclude at the prestigious series was #43: $1k Double Stack No-Limit Hold’em that drew a field of 3,991 entries to build a prize pool of $3,551,990 that was eventually shared by the top 599 finishers. After eight and a half hours of play on Day 4 of the event,  it was cash game player Anthony Denove who came out victorious to win the top $446,983 and his first gold bracelet.

It was a dream victory for the notable cash game player and talking about it, he said, “It’s been my dream to win a bracelet. I’ve been playing cash for six years but I do really love tournaments.”

“I knew a lot of those players would not be making any mistakes in a lot of spots,” he said talking about the line-up of players. “I try not to be too conscious of it, helps keep my expectations in check.”

Denove, who also recently became a father, began the final table as a chip leader and made good use of his chip advantage to outlast all the big names like  Michael Wang, Jeff Platt, and David Guay.

Denove started the FT in thundering fashion, busting Matthew Raffoul and Michael Wang in 10th and 9th places, respectively. It was the biggest pot of the tournament, putting Denove in the commanding lead. The next player to fall was Joshua Harrison whose ace-eight failed to beat the king-queen held by Frank Lagodich. Following him was in seventh was the start of the FT short stack in Kenneth Inouye.

Steven Stolzenfeld was next to fall when he shoved with pocket eights against Timothy Little’s ace-five. He was followed by Frank Lagodich who was busted by the eventual runner-up David Guay.

Jeff Platt was a big story of the final table. He made an astonishing run in the event, making it all the way to the final table. While he spent most of his time on the short stack, he did well, finishing 4th for $160,662. Platt has served the WSOP as a commentator and nice to see him do well at the tables.

Both Guay and Denove were almost equal in chips during the three-handed play, with Timothy Little being the shortest stack. Eventually, Little decided to shove all-in with ace-three against Guay’s ace-eight. An eight came on the river to pair up Guay and Little was busted in third place for $210,004.

Things were pretty even between Guay and Denove for chips at the start of the heads-up. Denove chipped up quickly and acquired a 2:1 lead within 30 minutes. Finally, he closed it out with a win. On the final hand, Guay picked up pocket nines and Denove got pocket tens. All of the chips got in before the flop. Guay failed improve on the board of Js 5s 5d Kd 8s and exited in second place, good for $276,269.