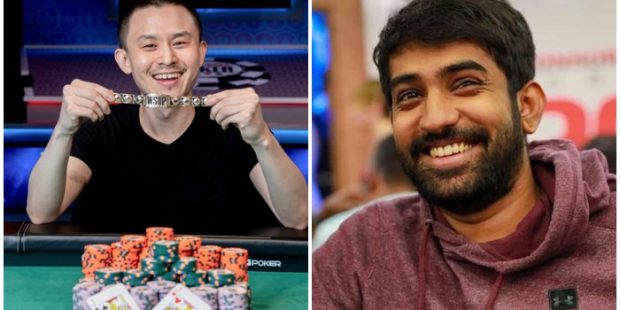 Ben Yu is among the latest bracelet winners at the 2021 World Series of Poker. The 35-year-old poker pro came out on top of a strong 329-entry field in Event #56: $10K 6-Handed NLH Championship to claim his fourth WSOP gold bracelet and the first-place prize of $721,453. This was the third-largest payday of Yu’s career and took his lifetime earnings to more than $8.2 million. With his latest victory, Yu became the eighth player to earn bracelet number four or higher so far at the 2021 WSOP in Las Vegas.

Post his fourth bracelet win, Yu said, “Every time you win one of these, it’s pretty special. This one, in particular, was a fairly tough event… and a fairly large field too. I don’t think I’m able to process this yet.”

The final day of this event began with 19 players remaining and Yu in the middle of the pack. The start-of-day chip leader Boris Kolev (7th for $62,505) and Matty Berkey (8th for $62,505) were eliminated at the same time on the final two tables, setting up the official final table of six. Yu was the shortest stack to start the table but was able to chip up and eventually ship the tournament.

Four-time bracelet winner Asi Moshe was the first to fall. He shoved with Jd 9d facing As 8s of Mike Sowers who rivered a winning flush to take down the pot and bust Moshe in sixth place. Following him was Steve Yea who shoved with pocket kings that did not hold against the As 10c of Ariel Mantel.

Mantel continued his rise by doubling through Mike Sowers, who had started the FT as the chip leader. Sowers became a short stack and ultimately exited in fourth place. He got his last five or so big blinds in with A-8 against the Kd 6d of Yu. A king on the river sent the pot Yu’s way and busted Sowers.

Yu was able to take and extend his lead during 3-handed play. He extended his advantage even further by eliminating  Ariel Mantel in third place ($293,578). Mantel had called off his stack with jacks against the K-7 of Yu, and a king on board was enough for Yu to win the pot and bust his opponent.

From Team India, the country’s first solo bracelet winner Abhinav Iyer was in the hunt for bracelet #2. He kept India’s bracelet hopes alive by making it to Day 3 with 19 players remaining. He got off to a good start by busting Nacho Barbero (18th for $33,042) with his ace-king beating the latter`s ace-jack. When the field whittled down to the final two tables, Iyer received several setbacks and lost a big chunk of his chips. Eventually, Iyer’s chase for his second GOLD bracelet ended in 12th place ($41,481 – INR 31.09 Lac). Iyer’s 12th place finish is the highest score for Team India at the WSOP 2021 so far.

There are two more events having Indians in contention. The Indian poker community now pins hopes on poker pro and coach Abhishek Goindi who has entered the final day of Event #55: $400 Colossus NLHE. There are 49 players remaining, with Rafael Fernandes (23,300,000) leading them. Goindi is 25th in chips with a stack of 6,225,000. The 2018  bracelet winner, Nikita Luther, is eyeing her second gold bracelet in Event #59: $1,000 Tag Team where her tag team partner this year is Adda52 Game Ambassador Kunal Patni. The team of Luther and Patni have bagged the fourth largest stack on Day 1 (195,000), with Team Mike Ruter – Samy Dighlawi (338,000) leading the 127 surviving teams into Day 2.