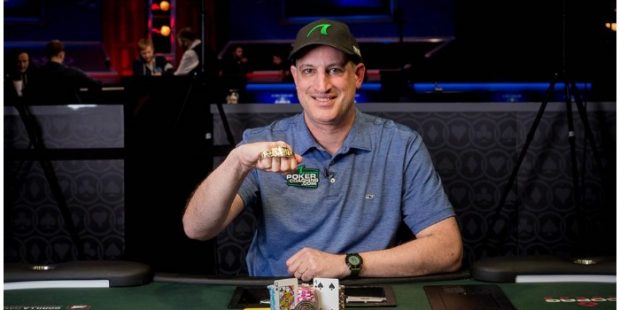 Gershon Distenfeld took down the 2021 World Series of Poker (WSOP) Event #48: $1,500 Shootout No-Limit Hold’em to win $204,063 and his first WSOP bracelet. However, the New Jersey native won’t take home even a single penny of the $204,063 he won as he has pledged to donate his entire score to various charities and hopes to inspire the other poker community members to do the same.

Taking about his bracelet win, Distenfeld said, “I’ve always dreamt of winning one, and it’s one of those things you think is never going to happen. I just don’t know what to say. I even teared up a little bit which is not very like me. I want to thank my family for showing up and surprising me. My brother-in-law and sister-in-law Sam and Jen Goldstein. They came and rooted me on, it was great. I wanted a rail so last night I offered a bunch of my friends to fly them in today and no one could do it.”

Distenfeld outlasted an 800-entry field to earn the title. There were 80 ten-handed tables on Day 1 with every winner securing a spot in the money. The 10 players who won their eight-handed Day 2 table earned a seat at the final table. The final table featured the likes of two-time WSOP bracelet winner and 10-time WSOP Circuit ring winner Ari Engel, Sohale Khalili, and veteran tournament grinder Orson Young. Given the format, every player started out with nearly identical chip counts at the final table and it was not long before the first elimination came in Craig Trost who got his stack in preflop with kings against the aces of Distenfeld. The aces held to eliminate Trost in tenth place.

AP Garza went out in ninth, and he was followed by Thomas Boivin in eighth. Distenfeld then eliminated the most accomplished player Engel in seventh. Engel ran his tens into the jacks of Distenfeld. Sohale Khalili exited in sixth after losing a flip, and David Tran was busted in fifth place by Orson Young. Despite scoring the elimination, Young was the next to fall after running kings into Schumacher’s aces to lose a chunk of his stack and then losing his remaining stack to Schumacher.

Jonathan Betancur had a solid stack but lost two hands in a row to Schumacher to exit in third.

Going into the heads-up, Schumacher held nearly 2-to-1 chip lead over Distenfeld, but the latter was able to brigdge the gap and eventually ship it. On the final hand, Schumacher jammed with Qd 10c and Distenfeld called with Qc 4s. The board ran out Ah Qs 7s 4h Ks, giving Distenfeld two pairs to win the title for $204,063. Schumacher had to settle for $126,133 for his runner-up finish.