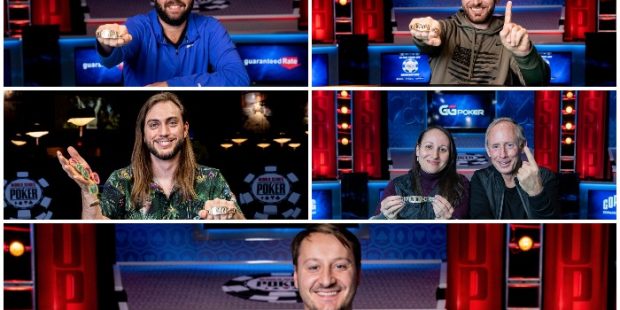 After a long wait of almost 11 years, California high-stakes poker pro-Michael Noori finally landed his first-ever WSOP gold bracelet after topping a massive field of 3,520 entries in Event #30: $1,500 Monster Stack NLH Freezeout. He masterfully navigated a short stack at the final table to eventually ship it after defeating the hot running Ryan Leng (2nd for $377,220) to win his career-best $ 610,437.

Noori played exceptionally well at the final table, eliminating four players on his way to the title. His first victim at the FT was Mordechai Hazan who exited in sixth place for $132,812. Noori continued his momentum and eliminated both Andler in fourth and Reis in third place. Leng held a commanding chip lead of 2:1 but Noori flopped a straight against Leng’s top two pair to double-up and overtake the lead for good. Forty minutes late, Noor claimed the title. On the final hand, Noori held pocket queens against Kc 8c of Leng. The ladies held up to help him to win the coveted title and his first bracelet.

“I feel pretty good. I’m still kind of in shock,” said Noori to WSOP live reporters after the dream WSOP victory. “The heads-up match went really quick, I’m still processing it and going through it. I had two huge coolers that went my way so I was fortunate enough to win the bracelet today.”

At Event #33: $800 8-Handed NL Hold’em Deepstack, it was an Israeli showdown with two Israeli players Ran Koller and Ran Ilani battling it out for the gold bracelet. In the end, it was Koller who shipped it to score his first career tournament victory, a memorable one as it came with a gold bracelet. This was Israel’s second bracelet in this series with Yuval Bronshtein winning the first. With seven left, Koller was a short stack at the final table. He was all-in preflop with 10c9c against Ilani’s Ah4d at the risk of his tournament life. The flop and turn were safe for Ilani, but the lucky 9d on the river save Koller.

Thereafter, Koller busted Jorge Hou (7th) and Ilani busted the rest to take the lead over Koller into the heads up. It was a well-fought dual with both players playing well. Once Koller overtook the lead, he managed to close it out with a win. Koller flopped the nuts with 5d3c on a flop of Ah4d2d. Ilani check-called a bet on the flop and got all-in on the Kh turn. Ilani showed 7h2h, good for a pair and a flush draw, but the river was not the card he was looking for. Ilani earned $166,552 for his runner-up finish.

“It’s amazing,” Koller said after his dream victory. “I do not even have words for it. It was surreal.”

“I came out here and initially I was only going to do ten days. But when you come out and win you just want to keep playing. So I’ll be here through the Main Event. $10,000 H.O.R.S.E. is tomorrow. That’s my tournament. I will celebrate tonight and I’ll get right back in it and celebrate this after the Main Event.,” the champ said after winning the 34th event of the ongoing World Series of Poker.

After a back and forth battle heads up, Anthony Koutsos topped a sizable field of 2,930 players to take down the 2021 World Series of Poker (WSOP) Event #35: $500 Freezeout No-Limit Hold’em. The real estate agent from San Francisco took home $167,272 and his first WSOP gold bracelet for the win.

Three players from Lithuania have won WSOP gold bracelets. Vincas Tamasauskas, Gediminas Uselis, and Vladas Burneikis all secured their bracelets in online events. When Lithuania’s Karolis Sereika topped a 1,441-player field in Event #37: $1,500 NLHE Super Turbofreezout at the WSOP 2021, he actually became the first player from his home country to take down a bracelet in a live event.

“This is the first live Lithuanian WSOP bracelet, so that means a lot to me and all Lithuanian players, I’m very happy and very excited,” he told PokerNews live reporters after securing the win. “Just so many emotions, I really wanted it with all my heart.”

On his way to the victory, Sereika overcame Brazil’s Pedro Padilha ($ 120,700) at heads up. Sereika held more than a 4:1 chip lead at the start of the heads-up. Padilha was able to battle his way into the lead, but Sereika won a sizable pot with pocket aces to regain control. On the final hand, Padilha shoved with Kc 8c and Sereika called with Ac 9c. The board ran out Qh 10h 6s 2s Ah, giving Sereika a pair of aces for the coveted victory. Padilha was awarded $120,700 as the runner-up finisher.

Keep following Online Poker News (OPN for all the latest updates from the ongoing WSOP 2021!