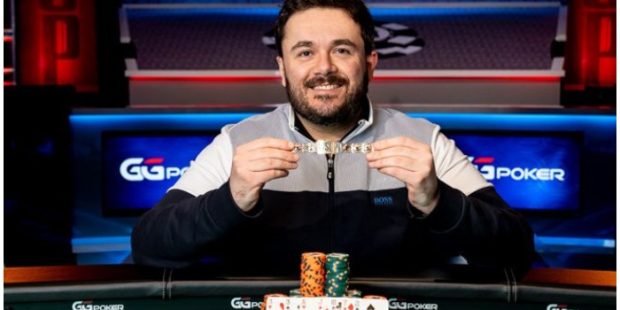 The 2021 World Series of Poker (WSOP) at the Rio All-Suite Hotel & Casino crowned a new gold bracelet winner on Monday in Event #19: $10,000 Seven Card Stud Championship. The 19th event of the ongoing series drew 62 players, building up an impressive $578,150 in the prize pool. In the end, walking away with the title was none other than the two-time WSOP bracelet winner and three-time WPT Main Event champion Anthony Zinno who banked $182,872 and the third bracelet of his career.

“Honestly, it’s unreal, because stud is one of the games that I’ve only been recently working on, so I wouldn’t have expected it to be this game,” Zinno said after the victory. “Some of the best stud players in the world were in the field.“I might play poker my whole life and not win another stud bracelet,” said Zinno. “These guys are so good at stud, and honestly, I’m not on the level of the top stud players by any stretch. There’s a lot of luck there, so that’s awesome,” Zinno added.

The PokerGO live-streamed final table was a star-studded affair with the likes of 15-time WSOP bracelet winner Phil Hellmuth who was chasing his sixteenth bracelet, Bracelet winner and 2019 Player of the Year award winner Stephen Chidwick, & Poker Hall of Fame member Jack McClelland.

The FT began with seven players remaining and all eyes were on Hellmuth as he held the chip lead. Unfortunately for him, he lost his lead during six-handed play and his run ended in fourth place for $54,730. This marked Hellmuth’s fourth cash and third final table of the prestigious WSOP series.

Jason Gola was the first to fall from the final table, with his split threes losing out to the split aces of James Chen. He was followed by Stephen Chidwick and Jack McClelland in sixth and fifth places, respectively.

Chen entered heads-up play against Zinno with over a 3:1 chip disadvatage. Chen was able to make an early comeback, and even overtook the lead briefly. However, Zinno regained control and finally shipped it. Chen was left with just a few big bets after Zinno won a big pot with an ace-high straight.

Chen shoved his tack on fifth street with (9s 6s) Ad 10s 7h against the (Jd  3h) Ah 3s 10c of Zinno. Chen found a 5d on the sixth street, while Zinno hit the 7d.  Zinno’s pair of threes remained in the lead with one card to come. Chen pulled the Js, missing all of his possible outs to take the lead. Zinno’s pair of threes did not improve any further, with the 2d on the end completing his board, but the small pair was enough to win the pot and the title. Chen earned $113,024 as the runner-up finisher.