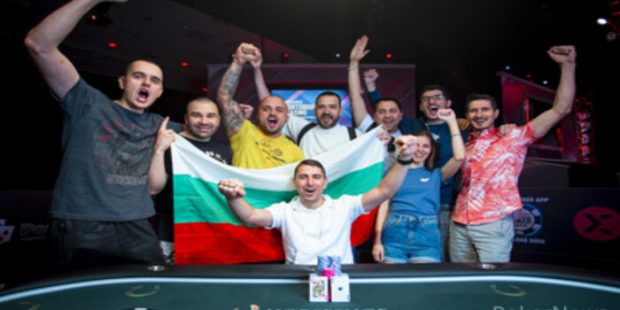 Event #49: $2,000 No-Limit Hold’em of the ongoing World Series of Poker (WSOP) 2022 concluded with Bulgaria’s Simeon Spasov emerging victorious after defeating Canada’s Mike Watson in heads-up for $527,944. The event, which ran for the first at the WSOP 2022, was a three-day tournament (23rd June to 25th June) but it took an extra day to crown a champion and concluded on Sunday.

The event drew in 1,977 entrants for a $3,519,060 in prize pool. Day 3 was scheduled to play down to a winner but an extra day needed to crown a champion. Only 39 started Day 3 and after 33 levels of play, only seven players made it to the fourth and final day of the tournament. Watson came into the final day as the chip leader, but he fell behind early after Spasov found a double with ace-queen.

A short time later, Evan Sandberg open-shoved with Q-10 Daniel Custodio called with A-J. The latter a pair of aces on the river to eliminate Sandberg  in seventh place. Knocking out the next player from the final table was none other than eventual champion Spasov who eliminated Christopher Frank in sixth place. The latter held pocket nines, which could not hold up against the A-Q of Spasov.

Spasov continued his hot run on the FT and eliminated Brazil’s Walter Ripper (fifth) who was pretty aggressive throughout the final two days. Angelou Konstas doing well by doubling through the bigger stacks, but his run ended in fourth place when his pocket queens could not hold up against pocket tens of Spasov who spiked a straight on the river, bringing down the field to the final three players.

Three-handed play continued until Daniel Custodio got it all in with Ac 2c and got called by Watson who made a straight with K-Q on the runout of A 10 5 8 J to send him home in third-place.

The heads-up for the title between Watson and Spasov lasted more than an hour. Spasov entered the heads-up play as a chip leader and did not allow his opponent to pull ahead. Finally, it all ended with Watson getting it in with ace-nine and losing to Spasov’s ace-queen on the Js Jc 4c 3d Qc board.