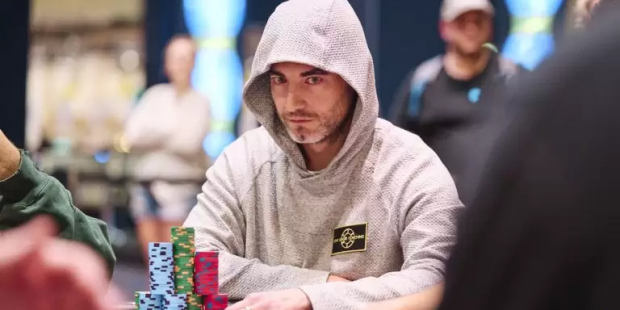 The world’s richest and longest-running poker festival, the 2022 World Series of Poker (WSOP), is underway at Bally’s and Paris Las Vegas and Event #2: $100,000 High Roller Bounty of the most prestigious festival has now reached the final table. Chance Kornuth who was among the 15 survivors from Day 1 is leading the star-studded final five players with a stack of 14,265,000 chips.

Day 2 of the event started from level 13 at 12 PM (PDT) on June 1 with blinds at 15,000/30,000 & a 30,000 ante. The day witnessed fast-paced action with some quick eliminations in the first few minutes. Some of the notables to exit early were Laszlo Bujtas, Frank Crivello, and Bill Klein.

Kornuth started his day in style with a massive double up through the Day 1 chip leader Justin Young and continued his momentum, eliminating heavyweights like Daniel Negreanu and Matthew Steinberg and ended the day with a commanding chip with a stack of 14,265,000. Holding 143 big blinds, he is now one of the favourites for the title among the remaining five players who will be returning tomorrow at 1PM PDT for Day 3.

Here is a quick look at Day 2 chip counts:

The event attracted a star-studded field of 46 entries and generated $3,300,500 in prize poool. Of the 46 entrants, only seven players were set to make money and it was Nick Petrangelo exited as the unfortunate bubble boy with his pocket kings being cracked by the pocket eights of Phil Ivey. Despite scoring the knockout, it was Ivey who became the next elimination, finishing in seventh for $133,127. He was followed by Matthew Steinberg who exited the event in sixth place for a $180,872 payday.

The final day of the event takes place tomorrow and it will be live-streamed on PokerGO on a 1-hour delay. All the five players have locked up at least $249,693, with the eventual winner receiving  the coveted WSOP Gold Bracelet and $1,166,810. The runner-up will take home $721,144 for his efforts.