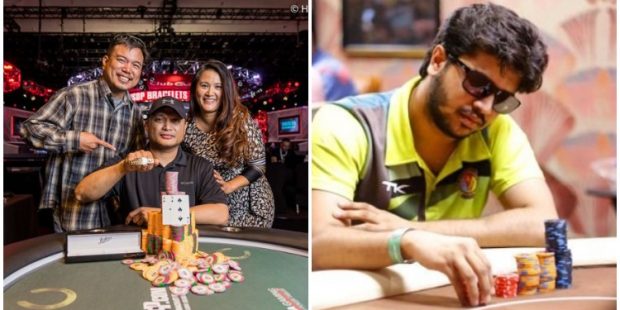 With the World Series of Poker (WSOP) 2022 running full steam, poker players from all across the globe are flocking to the Mecca of poker – Las Vegas to participate in the 53rd annual series. Several players have made their dreams come true by capturing their maiden bracelets. The latest to join the list is Henry Acain who overcame a record field of 20,080 in Event #5: $500 The Housewarming No-Limit Hold’em, taking home the grand $701,215 up top prize and his maiden WSOP gold bracelet.

Running from 2nd to 7th June, the tournament drew  a record-breaking field of 20,080 entries to create a whopping prize pool of $8,433,600 that was finally shared by the top 2,778. Only 889 players returned for Day 2. The eliminations were quick and only 12 players could advance by the day end.

The third and final day began with Christian Taylor (221,300,000) leading the final 12 players. Isidro Martinez was second in chips with 155,000,000, while Acain started the day fourth in chips but struck early, chipping up in a multi-way pot against Isidro Martinez and Taylor. He continued to strike and eliminated Sridhar Sangannagari (11th place), Yavine Brewer (10th) and Isidro Martinez (9th place) propelling his stack to the chip lead and getting ahead of his remaining  eight opponents.

The next elimination was scored by Orez Mokedi who sent Erik Carvalho packing in 9th place. Carvalho was followed by Jordan Hufty (7th) who was busted by the start of the day chip leader Christian Taylor.

The next player to fall out was Darnell White (6th place) whose Kd Qd lost to Ad Qx of Jared Kingery.

Kingery continued to fire and eliminated Jen-Yue Chiang in  5th place. The latter held Ks 7d, which lost to Kingery’s 10h 9c. Kingery hit a rivered a straight on the Jh 6h 3d 7c 8h board to take down the pot.

Exiting in 4th place was Orez Mokedi who pocket sixes could not hold against A-8 of Christian Taylor.

With three remaining, Taylor took the chip lead but could not retain his lead for long. A little later, he ended up doubling up Acain and thus losing his lead. A little later, Taylor’s run finally came to an end in third place when his pocket eights lost to Ah Jd of Acain. Taylor earned $326,965 for his deep run.

The heads-up began with Acain holding a massive chip lead over Kingery. The latter made a good start by picking up a double-up but could not go all the way, finishing runner-up for a good $433,255. The tournament ended with a thrilling hand that saw Kingery with As Ad and Acain Ac 3s. Unfortunately for Kingery, the board ran out with Ah, 7c 8c, Kc 4c, giving Acain a runner-runner flush to win the title. Representing Team India in this particular event was last year’s WPT India Mini Highroller champion Neel Joshi. He entered Day 2 with 945,000 and could not make much headway, eventually falling in 572nd place for $2,365 (INR 1.83 Lac) and becoming the second Indian to cash at the ongoing series.