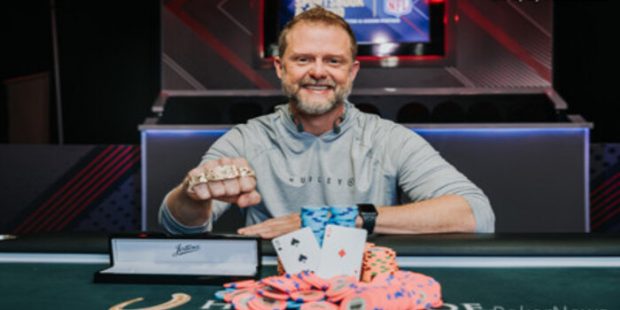 It was written in the stars that James Todd would win a WSOP bracelet and finally it happened for USA’s James Todd who emerged victorious  the 2022 World Series of Poker (WSOP) Event #54: $500 Salute to Warriors. Only 21 players returned to play down to a winner in this event on Tuesday and after  just five hours, Todd shipped it to claim a career-best $161,256 and his maiden WSOP bracelet.

Talking about his run, Todd later said, “I kinda did expect it. I came into this trip wanting and planning on leaving with a bracelet…I can’t explain it.”

He also gave credit to his girlfriend who was railing him on the final day. “Her just being here, rooting for me, means the world…You know I’ve been showing her pictures of bracelets, telling her I’m going to win, showing my clients. She believed in me the whole time, and so has my son.”

Over the three days of its run, the event drew in a record-breaking 3,209 entrants and generated a $1,315,690 in prize pool that was shared by 482 players. The money bubble burst on Mackenzie Horwitz and Scott Ayers, who split the $800 minimum cash between them. Following them were many notables who earned payouts, including the celebrity poker host Shaun Colquhoun (251st for $1,126), former bracelet winners Yueqi Zhu (194th for $1,277) & Steve Zolotow (141st for $1,460).