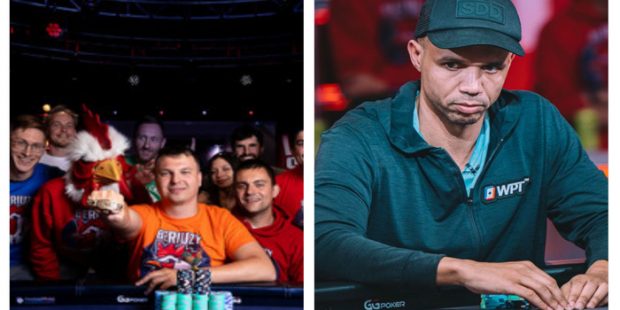 Event #42: $100,000 High Roller NLH of the ongoing World Series of Poker (WSOP) 2022 concluded with Latvia’s Aleksejs Ponakovs taking it down to clinch his second WSOP bracelet and a career-best $1,897,363. Finishing runner-up in this event was none other than the poker legend Phil Ivey who was chasing his 11th WSOP bracelet but that was not to be as he could not go all the way and ended up finishing runner-up for $1,172,659, narrowly missing out on his 11th career gold bracelet.

Ponakovs won his first bracelet last year in WSOP Online Event #8: $7,777 NLHE Lucky 7’s for $432,491, and last night’s victory made him the first Lativian player to win a bracelet in a live event. With his recent win, he moved into the top spot in Latvia’s All-Time Money List with $3,318,328.

Interestingly, this event ended one day sooner than anticipated and created a $5,998,500 prizepool that was shared by the top 10 finishers.  The final day began with 23 survivors, with defending WSOP Main Event champion Koray Aldemir exiting on the money bubble in11th place, and Eric Worre (10th for $162,623) bubbling the final table that began with Aleksejs Ponakovs leading the way in chips.

The final table began in a thundering fashion with a double elimination. The first player to exit the FT was Nick Petrangelo who went out in 9th place. The satart-of-day chip leader Masashi Oya was also eliminated on the same hand in 8th  place. Both players were busted Ben Heath who continued his domination and busted Mikita Badziakouski in 7th place after hitting a flush on the river. Following him in 6th place was Talal Shakerchi whose aces lost to the kings of Ponakovs who hit a quad on the turn.

The next player was yet again eliminated by Heath, this time he busted the Event #13: $1,500 Limit Hold’em champion Michael Moncek (5th) whose A-4 could not improve against pocket tens of Heath.

Heath continued his momentum and then busted Gregory Jensen in 4th place, briging it down to the final three players. Despite scoring four eliminations on the FT, Heath fell in 3rd place after his Ad 8d lost to Phil Ivey’s Qh Jh. The latter found a queen on the turn which was enough to win the pot.