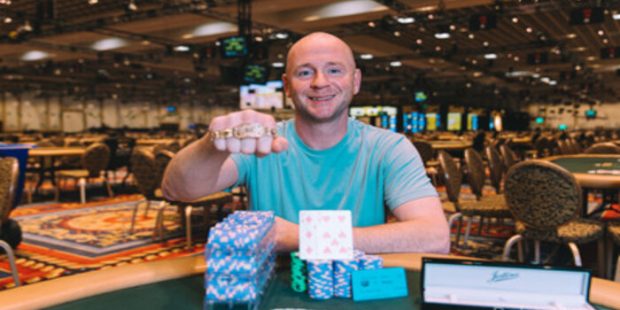 Sunday turned out to be memorable day for Ramsey Stovall as the poker dealer overcame a massive field of 2,227 entrants in the World Series of Poker (WSOP) 2022 Event #41: $1,000 Super Turbo Bounty No-Limit Hold ’em Freezeout to claim his maiden WSOP bracelet and $191,223 in top prize!

It was a single-day event lasting for about 15 hours and attracting 2,227 entrants who sat down throughout the day that saw several big guns leaving empty handed including Ralph Massey, Tiffany Michelle, WSOP Main Event champions Joe Cada and Koray Aldemir. Albert Rogers became the unfortunate bubble boy when his aces failed to beat the queen-ten offsuit of Greg Gabriel.

The final table began with short-stacked Wen Ni moving all in for his tournament life with a pair of eights and losing it to Wing Yam’s ace-ten offsuit. He was followed by Louise Francoeur (8th) and Ed Chang (7th) falling on the same hand. Both players moved all in against the raise of Stovall, who ended up calling them. Stovall held ace-eight against the king-queen of Francoeur and the king-jack of Chang.

After scoring the double knockout, Stovall then sent Rafael Lebron packing in 6th place. His next victim was Larry Carillo who was set for a double up when he got in his pocket kings in against Stovall’s king-ten suited. A flush on the flop left Carillo drawing dead, and his good run came to an end in 5th place.

The next elimination was scored by Steve Frakes who eliminated Wing Yam in 4th place. Falling out in 3rd place was none other than Frakes whose Ah 6h failed to beat Qc 3c of Stovall on the Ks 6s Qh  Jc Kc.

The heads-up play was a short affair as Timothy Heng shoved his last 22 big blinds against Stovall’s raise with ace-five offsuit, which Stovall called with pocket sevens. The board ran out 6c 4s 3d 8c 3s, giving the title to  Stovall.  Heng had to settle in second place for the runner-up payout of $118,213.