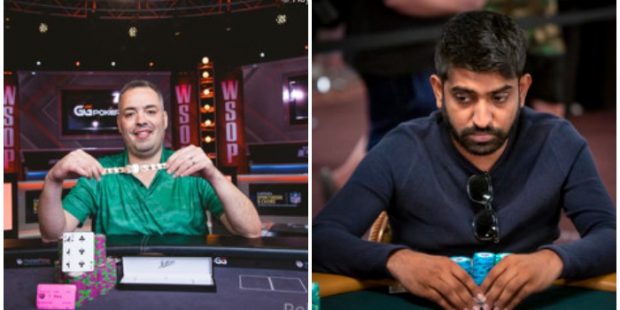 Indian challengers are making their presence felt at the World Series of Poker (WSOP) 2022 running at at Ballys and Paris Casino in Las Vegas.  After India’s Aditya Agarwal missing the bracelet in Event #3: $2,500 Freezeout NLH of the ongoing series, it was the former Indian WSOP bracelet winner Abhinav Iyer who missed out on the gold in #25: $800 No-Limit Hold’em Deepstack. Iyer came very close to clinching his second gold but could not make it all the way, finishing 7th for $56,388. It was the 2nd cash at the ongoing series for Iyer who finished 870th for $2,400 in Event #21: $1,500 Monster Stack.

Mumbai pro, Iyer entered the final table as the shortest stack with just 7,500,000 chips and did well finishing in 7th place. He was down to just 3,900,000 chips (less than 2BB) and badly needed a double-up, so he  decided to shove with Ad 6h.  Rajaee Wazwaz from the big blind made the call with 4s 5c. Unfortunately for Iyer, the board ran out 6c 5d Jc 4c 9s, giving Wazwaz two pairs to win the pot and dashing Iyer’s dream for the second bracelet. Iyer was eliminated in 7th  place and he cashed $56,388.

The tournament drew in a large field of 4,062 entries and created in $2,859,648 in prize pool that was  shared by the top 610 players. The largest share of that prizepool went to Rob Wazwaz who shipped the event just 5 minutes ago, taking home a massive $358,346 and his maiden WSOP gold bracelet.

Down to 10-handed play, USA’s Wazwaz held  the second largest stack with 22,000,000 and continued his momentum by scoring the first elimination on the final table in the form of Liran Betito whose Kc 9c lost to Wazwaz’s pocket rockets. Wazwaz  continued his domination and then went to bust India’s Abhinav Iyer in 7th place. Up next, he eliminated Dov Markowich in 5th place. He continued on his elimination spree and busted  Terence Reid in 3rd place to bring it down to the heads-up for the title.

The heads-up began with Wazwaz holding the chip lead over Robert Crow and carrying it all the way. The final hand of the tournament saw Crow with Kd 3h and Wazwaz with 6c 3c. The board ran out 2s 6d As 9c 7h. In this hand, Crow had  shoved on the river and Wazwaz called for just a pair of six, which was enough for him to win the tournament. Crow had to settle for $221,399 as the runner-up finisher.

More details will be added soon. Stay tuned in for more updates from the event.