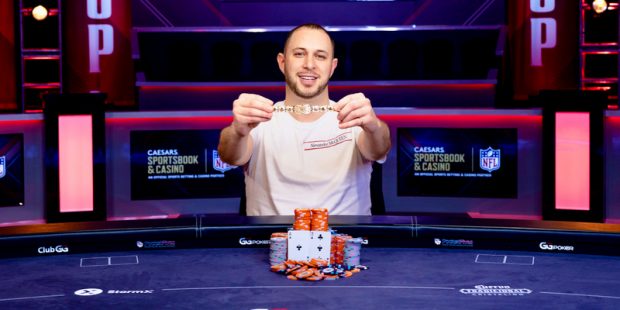 Event #51: $400 COLOSSUS No-Limit Hold’em of the WSOP 2022 drew in a massive field of 3,565 entries, building a prize pool worth $4,476,450. Following two starting flights and three more days of action, that sea of players narrowed down to a single champion and that was UK’s Paul Hizer.  The London resident claimed a career-best score of $414,490 and his first gold bracelet for the win.

This event was originally slated to run for four days, but the overwhelming response from players resulted in the need for extra time for a champion to be crowned. Only seven players returned for the final day, with Sam Laskowitz returning as a chip leader and Hizer being second in chips.

The first elimination on the final day was Anthony Ruttler who got all-in for less than three big blinds with Q-10, only to run into the pocket queens of Luong Quach who improved to a flush.

The next to fall was Jeff Loiacono whose Q-10 suited lost to the A-Q of Laskowitz. Despite scoring an elimination, Luong Quach was the next player who bowed out in fifth place. He shoved with 10-7 suited. Jordan Pelon called with 8-2 from the big blind and flopped top pair to take down the pot.

The next player was busted by Hizer who called an all-in from James Scott, who shoved for six big blinds. Scott held pocket tens against Hizer’s K-9. Hizer found a king on the turn and held from there.

After Jame Scott, it was Jordan Pelon who exited in third place. His Q-3 suited ran into the A-9 of Laskowitz. Finally, it came down to the heads-up between Laskowitz (412,000,0000) and Hizer 131,500,000). Hizer managed to close the gap a bit before doubling through Laskowitz to snatch the lead. He was able to extend his lead even further by making hero call on the river with king high.

Eventually, it all ended with Hizer moving all-in with Ac 3c and Laskowitz calling with 8c 2c for his last six big blinds.The board ran out Jc 7d 6d Ks 10s, giving the coveted pot and the title for Hizer.