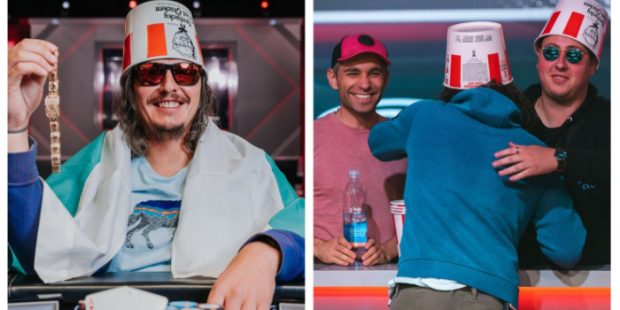 The tournament ran for five days and Kolev had to grind it hard among the world famous poker pro to make his way to the top, including including well-known bracelet winners Robert Mizrachi who finished 27th place at the end of Day 3 and James Calderaro who got eliminated 26th place.

Kolev entered the fifth and final day with 49 big blinds among the final five players but before the final table was set, there was a moment when he lost a huge pot with A-K to Raul Martinez’s pocket sevens and came down to a single 25,000 chip with the big blind at 500,000. However, he managed to win his way back into contention by winning it with pocket eights against Linus Ritcher’s pocket jacks.

Kolev came out all guns blazing for the final day and began on a cracking note by scoring the first elimination of the day as he eliminated USA’s Dominic Brazier in 5th place. He continued to fire and then eliminated Yita Choong in 4th place, narrowing it down to the final three players for the title.

After Tyler Gaston falling out in 3rd place, it came down the heads-up for the title between Oren Rosen and Kolev with the latter beginning the dual as a chip leader. The heads-up was a short affair and ended with Kolev three-betting with his pocket aces and Rosen calling with queen-jack offsuit. The board ran out 3c Qs 8h 3d 9c, giving the pot to Kolev to win the second bracelet of his career.

Among the 1196 players paid out in this event were 11 Indians headlined by the WSOP bracelet Aditya Sushant who finished 316th for $5,816. Read the details of who cashed how much HERE!