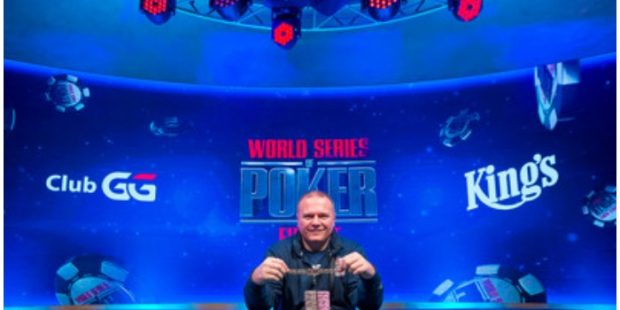 Edmond Jahjaga from Kosova is one of the latest WSOPE bracelet winners at the 2021 World Series of Poker Europe (WSOPE). He overcame a massive field of 2,478 entries in Event #5: €550 No-Limit Hold’em to win his career-first bracelet and €147,775 in prize money! The 43-year-old Jahjaga is a business owner and started playing poker about five years ago, and he is now a WSOPE champion.

Talking about his WSOPE victory, Jahjaga said, “It means a lot to me. I don’t know how to describe it because it comes so unexpected. The whole experience feels like a movie, and it just happened.”

With the elimination of Merijn van Rooij in 10th place for €10,747, the nine-handed final table was set with France’s Riadh Farhat in the lead. Jahjaga started the final table third in chips but was able to chip up and eventually win the coveted title. The first elimination of the final table came in Gabriele Re (9th place). He was followed by Fotios Ntamaris (8th), Aurelio Reggi (7th) and Zlatin Penev (6th).

Roman Krahula was knocked out in  5th place by Andrea Ricci. Despite scoring the elimination, Andrea Ricci was the next play to fall. He was eliminated Riadh Farhat in 4th place. Matteo Calzoni’s elimination in 3rd place brought it down to the heads-up play between Edmond Jahjaga (48,800,000) and Riadh Farhat (13,100,000), with Jahjaga holding the commanding chip lead over Farhat.

The heads-up did not last long and was over in just 12 minutes. On the final hand of the dual, Farhat raised with Kd Qs and Jahjaga shoved all-in with Ac 9c. Farhat snap-called and the board ran out 4s 4d 2h Ah 5d, giving Jahjaga two pairs to lock up the pot as well as the title. Jahjaga earned an impressive €147,775 for the win, while France’s Farhat walked away with a runner-up payout worth €91,318.